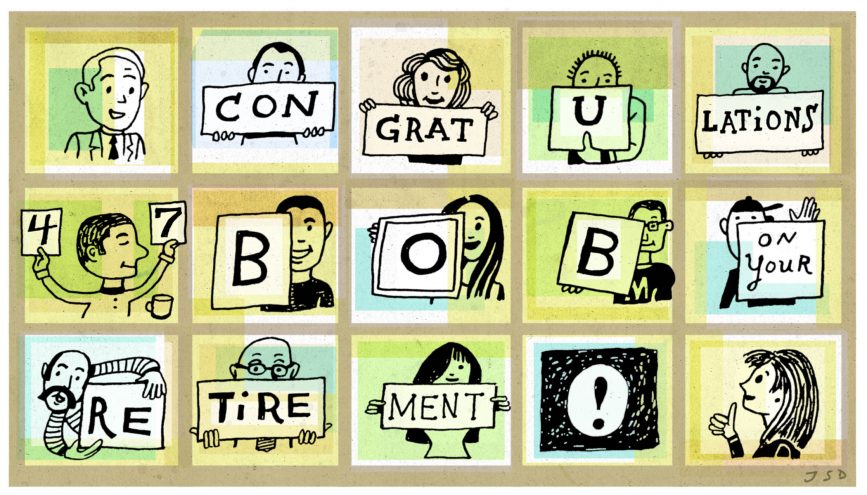 In 1974, Richard Nixon resigned as president. Barbra Streisand’s “The Way We Were” was No. 1 on the Billboard charts. Middlebury’s comprehensive fee was $4,400. And a young man named Bob Preseau started working at the College as a pot washer in Proctor Dining Hall.

David Provost, executive vice president for finance and administration, shared these and other 1974 trivia nuggets at Preseau’s Zoom retirement party on Tuesday, February 2, noting that Preseau’s 47 years at Middlebury accounted for more than 20 percent of the time the College has been in operation.

The retirement festivities began with Preseau on camera, wearing a face covering, flanked by emcee Mike Moser, director of Facilities Services, and Scott Barker and Eric Leno of HVAC and refrigeration. In a humorous twist on the traditional gift of a retirement chair, the trio presented Preseau with a custom captain’s chair made entirely of PVC pipe (“due to budget cuts”), complete with a fishing pole holder—and a fishing pole—and a large bag of his signature snack: popcorn.

Provost outlined Preseau’s work at the College, which started in Dining Services but after a few years moved to the Purchasing Department, where Preseau became shipping and receiving coordinator, running the stock room in Facilities for over 40 years. Provost and President Laurie Patton formally thanked Preseau for his years of service to the College. Then Moser, after reading out memories and congratulations sent in by friends and coworkers, asked Preseau to share some stories from his career at Middlebury.

Despite nerves from being on Zoom for the first time ever, Preseau did come up with a few anecdotes, starting with one about a very busy and stressful day just before Commencement, back when Ann Hanson was still dean of students. She and her team, who worked in the front of the Service Building at the time, were anxiously waiting for a shipment of blue diploma covers that still had not arrived. When the order finally came, Preseau carried one of the boxes to the front of the building. He opened the box in front of everyone, then stared inside in horror. “These covers are green!” he said. (They were, of course, blue, but he got the panicked reaction he was hoping for.)

“You have to have fun to make something that huge be successful,” he said of Commencement. “Ann wanted to kill me that day, but we always ended up being friends.”

He also recalled a unique method four Febs once used to move a bed from Stewart Hall to storage to make room for a loft. They sat on the headboard of the bed and rode it like a sled from Stewart all the way down the snowy hill to the Service Building.

“Some administrators weren’t impressed,” Preseau said. “But I was.”

Next, in a nod to Preseau’s favorite artist, Elton John, Moser donned a pair of flashy sunglasses and a white scarf and belted out a stanza of “Benny and the Jets”—renamed “Bobby Is the Best”—with new lyrics penned by Moser and Mary Stanley, space manager for Facilities. Moser promised Preseau a live, in-person version of the full song as soon as pandemic conditions allowed.

After presenting Preseau with a plaque bearing his name, to be mounted above the door of the Facilities stock room, Barker then listed Preseau’s many contributions to the College and the community, noting in particular Preseau’s uncanny knack for fundraising. Among other accomplishments, Preseau started a fund for international students staying on campus over the Christmas break, and he kept the Sunshine Fund—for people going through hard times—up and running. Over the years, he was active with local chapters of the American Legion, Eagles Club, and Masonic Lodge, as well as with Friends of Middlebury Hockey and the Orwell Parade Committee. He received the Staff Recognition Award in 2010.

Barker wrapped up, saying, “Bob has paid it forward in any way he can. He is the guy we should strive to be. Thanks, Bob, for setting an example and being the leader you are.”

After accepting more gifts, Preseau thanked everyone for their real and virtual attendance, cards, and calls. He choked up a bit when talking about how hard it would be to leave his work crew behind but said he looked forward to fishing and golfing with friends. Finally, he warned folks that once COVID conditions permitted, he’d again be fundraising for Friends of Middlebury Hockey.