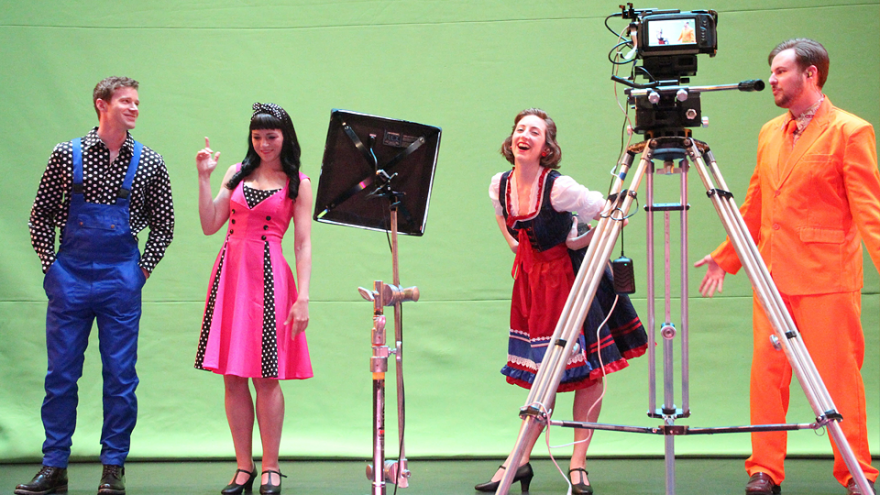 As Doug Anderson began to think about the 2020 season for the Opera Company of Middlebury (OCM), he began to toy with the idea of producing Candide. And through a fortuitous event, he found the perfect person for the lead role: Quinn Bernegger ’13. Bernegger had worked with Anderson at the Town Hall Theater in Middlebury, where Anderson is the artistic director, when he was at the College. Both had been looking for a way to bring Bernegger back to perform, but since graduation, Bernegger had been singing opera with various companies and studying at the Boston Conservatory of Music and had been too busy to return. He was in the middle of a Young Artist program at the Opera Saratoga, which was holding auditions to showcase the singers’ talents, when Doug turned up in the audience with a group of agents and theater managers. Doug was delighted to see Bernegger come out on stage to audition and at the end of his performance, realized he had his Candide.

Anderson assembled the cast and began to plan out the production. The show was scheduled for October 2020, but by spring 2020, COVID had shut down in-person events. “There was no way we were going to be able to begin our 18th season with a full production on stage,” Anderson said. Like so many artistic companies across the country, OCM had to adjust. Anderson and his team decided they would make a video of Candide instead. “But I said, ‘Stop,’” Anderson said. “‘If we’re going to wade into an entirely new art form, we’ve got to be able to do video as well as we do opera. We can’t just point a camera at some singers and call it a day.’ I really felt we had to learn the tools of video. What are the tricks we can use to enhance the story, to create a kind of magic we can’t even create in the theater?” So they sought out a top-rate videographer, and hired a local professional, Tim Joy.

Joy introduced them to state-of-the-art video devices: drones, green screen, rear projection, steady cam, forced perspective. Doug, along with wife Debbie and Mary Longey, production manager, began to explore all the possibilities for the virtual show with the tools Joy was showing them. With rear projection they could show scenes of the locales in the opera and with green screen they could create sets that wouldn’t have to be built. And how could they use a drone? The creative ideas began to flow.

Meanwhile, the production team needed to come up with a way to make the video safely, due to COVID protocols. Following the guidelines of the CDC and the state of Vermont, they implemented testing and masking and quarantined the actors, who were coming from all over, in local houses they rented. “We used the time to focus on the music together,” said Bernegger.

When rehearsing and filming began, masks were worn by everybody involved when they were in the theater. The orchestra was filmed first, with masks, except for those who played wind instruments—plexiglass cubes were built for them. The chorus was also filmed before the actors were brought in, standing six feet apart.

Then there were the segments to film with the narrator, Jim Douglas ’72, former governor of Vermont. “We were using the concert version of Candide,” said Anderson, “which cuts out a lot of dialogue and gives the story to a wry narrator. As I was reading the text, I heard Jim Douglas in my head. He always had a dry sense of humor and as governor, he got a lot of laughs speaking publicly.” Douglas had a good time in his operatic debut, but, like everything else, it was an unusual procedure. In several spots, Douglas interacts with the actors, but they weren’t actually in the theater during his filming. Anderson had to read their lines so Douglas would know how to respond. And even though he had the whole script, Douglas had a hard time with context because the performance wasn’t going on as he narrated. Anderson would have to explain what was happening around the narration and how it should sound.

And when it came time to work with the rest of the cast, Anderson, as director, continued to improvise. “There was a point at which there was a conversation about whether we were going to run the show without masks before we were on camera so that Doug and other people could see what we were doing with our faces,” said Bernegger. “It was all completely untried. Everyone was inventing something. There were some difficult discussions around this because Doug would have loved to see us before filming—but we decided to keep masks on during rehearsals. People were still uncomfortable.” He added, “Doug and the others trusted us. They had brought in a crew that they knew and had strong relationships with and they knew they could rely on us.”

The day came to begin filming. Bernegger remembers thinking, “This can’t possibly be good. I know Doug always does amazing stuff, but it can’t possibly be that good.” His first scene being shot was when he is in bed with Cunegonde. They had the bed all set up, looking like a regular professional stage set and it helped Bernegger feel more at ease. “It made it easier to slip into the character I was playing.” While some stage props were used, however, a great deal of the action took place in front of the blank green screen. At times Bernegger found himself asking Anderson what he was looking at to give himself a mental image of the scene.

In fact, Anderson had to direct from behind a monitor at the back of the room so he could see what was really happening on stage with all the video elements they were using.  This style of directing was very different from what he was used to. Bernegger explained, “I know for Doug it was trying and weird to direct wearing a mask and standing so far away. His directing style is being close, having a one-on-one relationship where he may literally be whispering something in our ears about a certain element of a character.” Michael Sakir, the music director, also had to conduct the singing from behind a monitor. The only orchestra music being heard was coming through ear monitors in the actors’ ears, where they were listening to the recording that had been done earlier by the instruments. That was another operatic challenge. Sakir will usually collaborate with a singer, either leading them where they should go in a song or more frequently, listening to the singer and telling the orchestra how to play along with what the singer is doing. Instead, he was watching the orchestra recording on the monitor and trying to conduct the actors in the same way he had conducted the orchestra.

“It was all totally crazy. Everthing was backwards,” said Bernegger. “But it was all done in the effort to make a show again, for us as performers and for the audience. I was really impressed with how well everything came together.”

“Tech stirs creative impulses in remarkable ways,” Anderson said. “Nothing will ever replace a live production in a theater, but nothing is quite the same as the marvelous effects you can get in a video.”