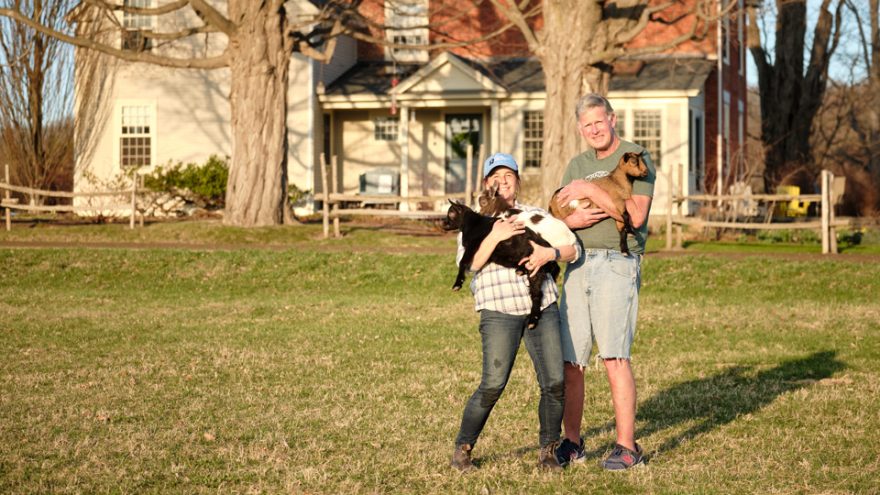 One of the things Katharine DeLorenzo enjoys most about her farm—besides the animals, of course—is connecting other people to the experience. Returning home recently after a day at work, she walked into her small barn next to the house. A young man was sitting on some straw in the corner of the goat pen, a baby goat on his lap. He looked up at her and said, “This is the best day of my life.”

The young man was a friend of one of DeLorenzo’s field hockey players. DeLorenzo is the head coach of the field hockey team at Middlebury, as well as the assistant director of athletics. And as of a little over a year ago, she can also be called a farmer, something she has aspired to all her life.

Though she grew up mainly in Virginia, every year when summer vacation began, DeLorenzo and her family would move for three months to their camp on Lake Carmi in Franklin, Vermont, near where her father had grown up in the northwestern corner of the state. And four or five days of every week would find DeLorenzo four miles away at the Gates dairy farm, helping out.

“Being there, I never thought about being anywhere else. The hay-cutting and -stacking weeks were a blast because I was outside with everybody filling a wagon, unpacking a wagon, and getting it up into the loft. And I loved the calf barn. If chores were done, people would just find me sitting in there.” DeLorenzo particularly enjoyed the trench milking parlor. “The cows walk in a half level above you. You read the tag number, look at how much grain they get, pull the cable, and that much grain goes in their bowl and they eat, and you clean them off. I felt like I was contributing something of value.”

So what in particular about that experience made DeLorenzo always yearn to have a farm of her own? “I have to first say it must be the way I feel and connect with animals when I’m with them. I feel like I’ve always been kind of an old soul, and it connects you to all past times, especially having sheep and chickens and goats and dogs. I love the way they fit into the context of the world as it’s been lived.” In the 1800s in Vermont, sheep farming was the mainstay of agriculture.

Living in Vermont was always the goal for DeLorenzo, although she worked as a head coach in Ohio at Oberlin and New York at Skidmore. When the job at the College came up, she jumped at the chance to work and live in Middlebury. She and her husband, Gene, bought a house in the Buttolph Acres development, close to town and schools, where they raised their sons and DeLorenzo developed a successful field hockey program at Middlebury.

But after Gene, a longtime coach himself who had recently worked at the College as a nightwatchman, retired in 2018, they began to think about selling their home in town. Going for a drive one day, they were headed down Route 30 when suddenly both their heads swiveled right as they passed a beautiful old farmhouse. “Is that place still for sale?” they asked, looking at each other. Just a few months later, they closed on the house.

For the first time in years, DeLorenzo’s dream of someday running her own small farm seemed doable. “Buying the house in the country just blew the doors off of thinking creatively, and things that had been lying dormant and not been possible since I had been an adult suddenly were. And as soon as something’s possible,” she adds with a laugh, “then it’s probable.”

A young man was sitting on some straw in the corner of the goat pen, a baby goat on his lap. He looked up at her and said, “This is the best day of my life.”

Gene’s reaction was “if you know what you’re doing, let’s do it.” DeLorenzo set to work studying the idea and developing a plan over the next month or so, working tirelessly for the right design for the first half-acre behind the house. They had an Amish gentleman in Whitehall, New York, build a 10-by-14 sheep barn, which they brought home on a flatbed. They put up the fencing they needed and began to look for sheep locally. DeLorenzo thought she wanted merino sheep, but they were hard to come by, so she ended up with two Clun Forest sheep, Bella and Gertrude, and six Romneys, three of which came from a farm in Orwell owned by Birch Andrews, who works in Admissions. “She has the most beautiful sheep farm setting I have ever seen in my life with an old orchard hillside that overlooks the Green Mountains,” DeLorenzo said.

With the addition of chickens, roosters, and goats and a nine-acre parcel of land across the street for haying, the DeLorenzo farm is complete for now. Oh, and there is also Howard—a 140-pound Maremma sheepdog who guards the livestock.

DeLorenzo couldn’t help sharing her passion for the farm with her field hockey players, coworkers, swim class students, and just about any friend or acquaintance she might run into on the street. And not only did she talk about her farm, she opened it up to anyone who wanted to stop by. For many of the College students, it became a home away from home, especially during the stressful times of the pandemic. And DeLo (pronounced “DeeLow”), as the field hockey players affectionately call her, and Gene have been more than welcoming.

“The farm has meant the world to me this year,” said Diana Milne ’21, a field hockey player. “I am from a farm town in Michigan and have worked on a neighbor’s farm in the summers in college. It has made me feel closer to home and given me and DeLo another shared passion to talk about. Also, as a senior on the team, I have seen people transform and show different sides of themselves around the animals that I’ve never seen before. For instance, one teammate will spend hours with her favorite goat, another holds the chickens because she grew up with chickens, others sprint when they see Howard.”

Meg Fearey ’21, another field hockey player, adds, “The farm is a special place and has become my getaway from stress. One night, after doing a lot of work being emotionally and physically exhausted, the only thing I wanted to do was go to the farm. I drove there and sat in the baby goat barn for an hour and a half in silence with DeLo. It was beautiful. There is truly nothing else like it.”

However, DeLorenzo emphasizes that just as sports aren’t for everyone, holding animals or helping with chores may not be for everyone either. But they can find other ways to appreciate the farm. Her son, Perry, who graduated from Middlebury last year, brought a friend over who did a beautiful watercolor of Howard. One of her swim students is a photographer and artist and is working on sketches from photos she’s taken on the farm.

And it’s not just the College students who love the farm. Several children live within walking distance and come to visit often with treats for Howard or to bring friends by to introduce them to the animals. They’ll ask, “Can I come back?” And DeLorenzo will answer, “Of course. But if you come back, you’re going to have to help out.”

Eleven-year-old Maggie Morter lives nearby. “I haven’t helped with chores yet, but I should because I spend so much time down there. I love that the farm is right down the road and that I can walk over to say hi to the animals whenever I feel like it. I also love the baby goats—when you get down on all fours they will jump on your back. The sheep are so soft and most of them are chill with you petting them. When I’m done visiting, Howard will run alongside me until the end of the pen, and then we say goodbye.”