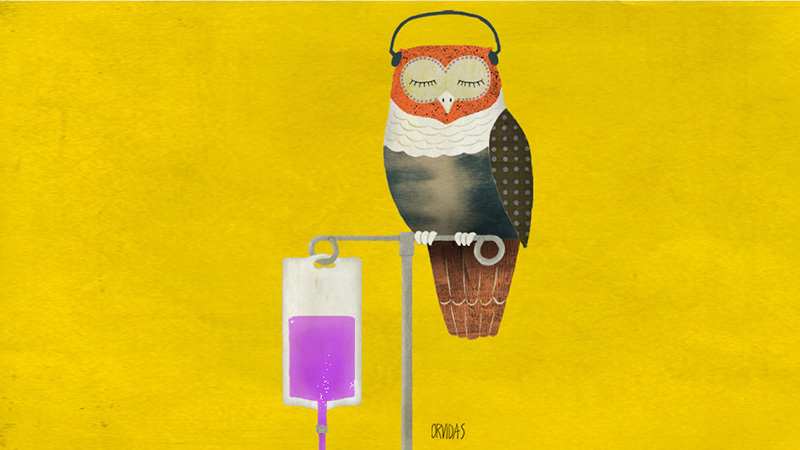 When Kimberly Marshall, circulation services specialist at Davis Family Library, went to work on Monday, March 8, “Rescue an injured barred owl” was not on her to-do list for the day.

But soon after she arrived at the library, facilities staff David Snyder and Greg Sharon came inside to tell her that there was a hurt, possibly dead, owl in the snow next to the building.

Marshall went out and determined that the owl was alive, but the temperature was only 3°F that morning, and there was no telling how long it might have been lying there over the weekend. They wondered if he had flown into one of the library’s windows the day before, which had been very sunny.

By chance, last summer Marshall had rescued an owl that had been hit by a car, so she knew what to do. She covered the owl with her coat to keep it warm until she could return with a sturdy cardboard book box from the library. She carried the box to a quiet office inside and then called VINS, the Vermont Institute of Natural Science, in Quechee.

In addition to offering environmental education programs and promoting environmental science field research, VINS operates a prominent avian wildlife rehabilitation clinic at its Nature Center. Staff there agreed to take the owl and even offered to find a volunteer to meet Marshall halfway between Quechee and Middlebury.

But after an hour, Marshall began to worry. “I was concerned that once he warmed up and kind of came to—I didn’t want an owl flying around the library!” Her fear of an injured, confused bird with large talons and a sharp beak careening through the building prompted her to take action; with the help of student circulation employee Ryan Wheatley ’21, she got the box into her car and made the long drive to Quechee.

Once at VINS, the owl, which came to be known by College staff as “the Davis owl,” or “Davis,” went through the standard intake procedure. This included a half-hour in an oxygen chamber to de-stress, followed by a complete physical exam, where staff looked for things like fractures, tissue damage, and internal trauma. His lethargy indicated some head trauma, and he had a mild right-eye injury. They put him on anti-inflammatories.

Grae O’Toole, the director of wild bird rehab at VINS, said, “For owls, for the most part, we do see a lot of head trauma cases. They usually are hit by cars, but this guy was interesting in that he most likely hit a window.” She said barred owls are the most common birds to come in for treatment, with 105 coming to VINS in 2020 alone.

Each week, Marshall called for an update. In the beginning, she learned, Davis was being kept isolated in a cage. He was eating—a good sign—but had to be hand fed. Two weeks later, his condition had improved, and he had started feeding himself. He was moved to a larger indoor stall.

Around the fourth week, he had grown strong enough to be moved to the flight cage, the largest enclosure at VINS, with four other recovering owls. Here he would have at least a week to take short flights to rebuild his muscle strength and be assessed by staff. O’Toole said, “We evaluate their flight, we make sure they’re flying straight, they’re not losing any lift, their feathers are quiet.”

Finally, Marshall got the good news: Davis was healthy enough to be released—right back in Middlebury at the edge of campus. O’Toole explained: “Owls have their own little territories carved out for themselves. We want to release them to a place that is familiar to them. We want to make sure we’re setting them up for success after we release them.”

On Wednesday, April 14, two VINS interns drove Davis back to Middlebury. Joined by a small group that included Marshall, Snyder, Sharon, and Wheatley, they took him to the Colin O’Neill Class of ’97 Trail (part of the Trail Around Middlebury).

After setting the box down on a small wooden bridge in the woods, they lifted the lid, and Davis immediately flew out and up into a tree, where he sat calmly. He was home.

Downplaying her own role in his rescue, Marshall commended the group effort that helped save the owl. And she expressed her relief at the happy ending.

“It’s always nice to have stories like this come out in a year that hasn’t had such nice stories.”