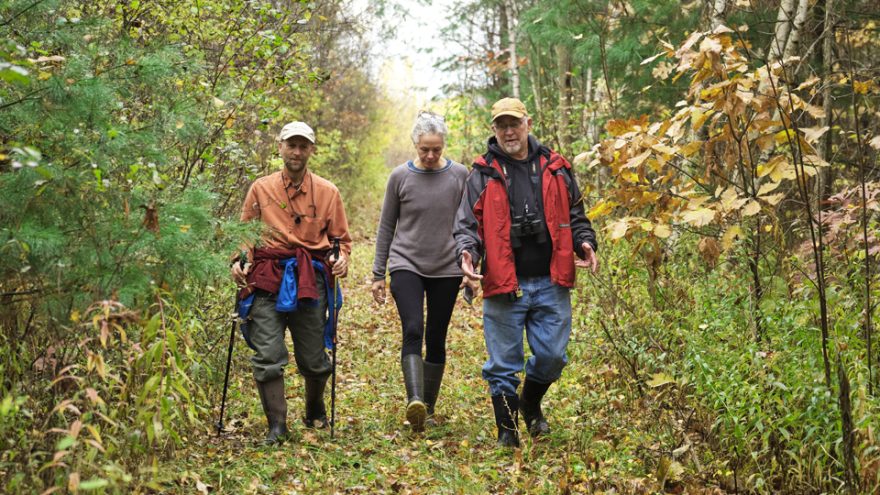 That’s the advice Steve Trombulak, professor emeritus of biology and environmental studies, gave me over Zoom in early October when we arranged to meet Tuesday, October 25, to explore what would, later that day, officially be named the Stephen C. Trombulak Nature Sanctuary, a 60-acre natural area on the southeastern edge of the Middlebury College campus.

Trombulak was returning to Middlebury, for the first time since his 2019 retirement, as a flattered if sheepish guest of honor at a ceremony that would put his name on the place where he spent so much time during his 34 years at the College. Fall after fall, cohorts of students in his Vertebrate Natural History course joined him at this parcel—a floodplain bordering Otter Creek—to put up nets to capture, band, and collect data on wild birds.

Marc Lapin ’83, an associate laboratory professor, was behind the idea to name the land for Trombulak, a good friend of his. “He left a legacy here,” Lapin says, “and I felt it was a good way to honor that legacy. I thought that his name should be carried on the way some other names are carried on here, because he was a force.” Lapin, who also serves as the College lands conservationist, is responsible for the stewardship of the 3,000 undeveloped acres owned by the College, including this parcel.

Lapin tells me that Trombulak, when he came to the College in 1985, was instrumental in rebuilding the Environmental Studies program that had been established in the 1960s. That predated the rise of conservation biology, which focuses on protecting and restoring the Earth’s biodiversity. Trombulak “rallied the troops and got things revived and made conservation biology and natural history teaching prominent here at the College,” Lapin says. Trombulak was also the first person to begin using this piece of College land for research and teaching.

Lapin concedes that Trombulak could be “prickly” in the classroom, but says he showed another side in the field. “He was a different person when he was out there with the animals, and showing people, teaching people, than when he was, you know, working with quantitative models or computer models.”

Four of us—Trombulak, Lapin, photographer Paul Dahm, and I—meet at 9:00 a.m. on that Tuesday morning, in our mud boots, near the College track. Under a cloudy autumn sky, we start off on the Trail Around Middlebury, following it east across South Street and around the College baseball field. Soon after crossing the railroad tracks, we leave the TAM, taking a right into a field, with shrubland and woods beyond. Though a formal sign likely won’t be posted until the spring, this is it: the Stephen C. Trombulak Nature Sanctuary.

Ironically, Trombulak may be the only person who has never called it a sanctuary; to him, it is the “teaching and research natural area.” But Luther Tenny, associate director of Facilities Services, and his crew, who did the brush hogging for Trombulak, knew it only for the birds that he studied. They called it the “bird sanctuary,” and the name stuck. Trombulak estimates about 25 years of Middlebury students called it the “sanctuary.”

It’s the first time he’s seen the land since he retired, and he seems pleased with how it’s looking. The field has been recently brush hogged, as have the two visible “lanes”—narrow alleys, up to 100 meters long, through the trees—where Trombulak and his students used to set up sheer bird nets. We head through the field toward one of those lanes, past a stand of waist-high, netting-covered enclosures in some tall grass. These, Lapin explains, are part of a grasshopper study being conducted by a research group from Yale, just one sign that the land is still actively being used for scientific purposes.

Trombulak reminisces about the classes in which students would meet here at 6:00 a.m. to raise the nets in five lanes, collect the trapped birds, and carry them back in bags around their necks to the banding station in this field. They’d weigh, measure, and band the birds before releasing them. He notes how special it is that this kind of habitat is available so close to campus. “You go to almost any other university or college, and to get to a natural area, you have to rent vans or buses, and you have to drive for an hour and a half.”

In the middle of the field is an area that, not having been mown in four or five years, has grown up with tall shrubs and young birches. In the spring (and, on occasion, in the fall), this whole area floods, resulting in the rich soil characteristic of the floodplain it is. If left alone, in 15 or 20 years this scrub will give way to second-growth forest, thick with pines and red maple saplings. In fact, that’s the sort of environment we find ourselves in next as we continue along the path.

Eventually, the straight bird-netting alley ends and the environment changes again, the dense growth of young shrub trees giving way to more open, older-growth woods marked by larger oak and ash trees. The winding path is hard to make out under a thick layer of fallen leaves, but blazes of blue paint on trunks ahead lead the way. Trombulak remembers, with a laugh, how proud he was making sure the paint color exactly matched that used by the U.S. Forest Service. “I don’t know why I felt that was necessary,” he says, “since this isn’t Forest Service land.”

We follow the trail to its end at the western edge of Otter Creek. Creek Road hugs the far bank, with farms and fields beyond that. The land here is uneven, the seasonal floodwaters having created berms in some areas and depressions in others. Today, the land is dry underfoot, but it’s not like that all year long.

Each spring in the low spots, the flooding leaves behind temporary vernal pools, valuable breeding ground for amphibians. Lapin points out a line on the trees, about two feet up, where the bark changes color; this marks the spring flood level. Nearby, 15 or 20 trees have wire gauges wrapped around them; Lapin says they’re part of a student research project involving their growth rates. He’s happy to see it. “We’re always trying to get more professors to use these lands,” he says.

As we stand at the edge of the creek, Lapin and Trombulak start ticking off the wildlife they’ve encountered in the sanctuary: geese, several species of duck, beavers, great-horned and barred owls. “We’ve had bald eagles in the morning, just sitting in the trees along the creek,” Trombulak says. “We’ve banded over 75 species of birds; there’s probably another 75 we’ve seen on this land that never come down to the nets.”

If we had more time, we’d explore one of several secondary trails. Instead, we backtrack, enjoying the crunchy leaves under our feet and a distinctive fall fragrance Lapin tells me is characteristic of wetlands: the smell of wild viburnum­ decaying. Through a gap in the trees, he points out the open marsh the other trail would have taken us to.

Lapin hopes that naming the sanctuary will raise awareness of the land as a resource, whether for education or recreation. “How many people run along the TAM, how many people love nature and would love to learn from and experience this place? And now people will know it’s here.”

Trombulak says there’s also a less obvious but critical benefit to this parcel of land: by absorbing the creek’s annual floodwaters, it protects the town of Middlebury. A 2016 study published in Ecological Economics estimates that this land, as a key upstream floodplain and wetland, saves the town up to nearly $500,000 in avoided flood damages each year.

As we come back within view of the College track, Trombulak reiterates something he told me earlier: that though he managed the sanctuary to further his research on birds, he has no expectation that it will be used that way in the future. The educational use of the land will—and should—be dictated by the changing needs and interests of current and future faculty. And he’s thrilled that this resource exists for them. Despite “Trombulak” in the sanctuary’s name, he says, “this isn’t my place.”

In his mind, its existence says more about Middlebury College than it does about him. “I didn’t invent the College’s commitment to nature studies. I was hired to fill a position called vertebrate field biology, and it was the only such position I saw as I was coming out of graduate school. From the very beginning, long before I got here, the College was committed to that, and it just continues from there.

“But I’m honored that my name is attached to it.”