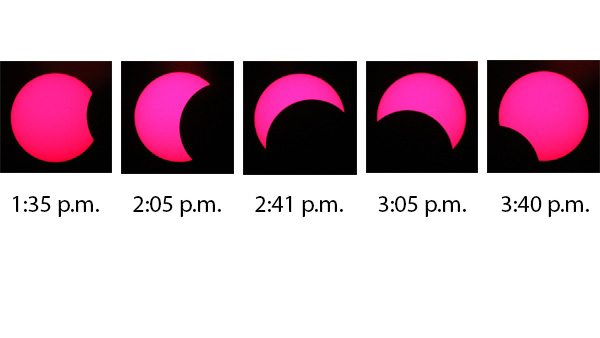 We recognize that unless you have been living under a rock, you are aware of the solar eclipse that occurred this week. But we doubt that you’ve seen an image sequence as stunning as the one above, which was captured by Middlebury’s Jonathan Kemp at the Mittelman Observatory on the roof of Bicentennial Hall.

You know what’s also really cool? Our colleagues over in Special Collections have digitized more than 120 volumes of the student yearbook Kaleidoscope, a collection that goes all the way back to the issue from the 1873-1874 academic year. Be forewarned: before diving in, make sure you have ample time to browse. This is a very deep and extensive rabbit hole to descend.

The Middlebury New Filmmakers Festival opens today, Thursday, and will run through the weekend. Several Middlebury alums will be debuting their films. In addition, the festivities include a tribute to legendary direction Robert Altman; a conversation with journalist and screenwriter Dick Lehr; as well as what should be an unforgettable experience: the festivals first virtual-reality exhibition. If you’re in the area, tickets are still available.

The Vermont alt-weekly Seven Days recently published a terrific piece about artist Sabra Field ’57 and the Middlebury College Art Museum’s summer exhibit of some of her best work: “Sabra Field, Now and Then: A Retrospective.” The exhibit closed on August 13, but if you didn’t get a chance to check it out, you shouldn’t totally despair. The linked story does a very nice job of, well, painting the scene for you.