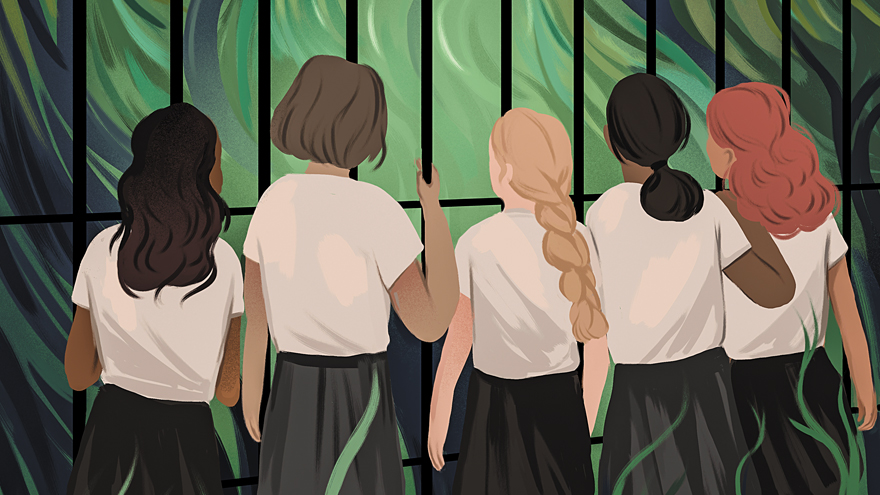 A mere five pages into Wilder Girls, the debut young adult novel by Nike “Rory” Power ’14, a fight breaks out among the three main characters. Who also happen to be best friends.

Bodies are hurled to the floor. Knees shoved into faces. Noses cracked. Hair yanked. It only ends when one girl, victorious, sprawled on a staircase, holds the contested prize aloft: an orange.

There’s a reason why this groundbreaking book has been described as a feminist Lord of the Flies.

Set on an island at an all-girls boarding school off the coast of Maine where a mysterious illness—the Tox—has forced a quarantine and killed off most of the teachers and half the students in grisly, body-morphing fashion (hands turn to silver claws, second spines sprout), Wilder Girls ostensibly follows three friends as they try to discover what’s made everyone sick, navigate a strange new world in which nature itself has turned savage, and, ultimately, save themselves.

But while this is teen-narrated, speculative fiction at its fast-page-turning best, there’s a lot more going on here than just mind-bending plot. Power trains her formidable writing skills on small moments so that they loom large and wonderfully suggestive. Two girls’ quiet visit to water’s edge becomes a rumination on lost innocence and sexual awakening. A student’s first Tox outbreak seems an apt metaphor for puberty. One narrator’s revelation that she lies because “I like to see what I can do” reads like a novelist’s confession: the compulsion to create is complicated.

Power also lures us in so we feel right along with her characters, a hallmark of the young adult genre. Adolescents lead with their hearts and read in order to get on board an emotional roller coaster, so when halfway through I found myself growling under my breath and wishing the students would whip out their carving knives and take out every lying, controlling, traitorous adult in charge, I realized: she had me right where she wanted me. This is weaponized storytelling. Book-as-cleaver. Take that.

Ultimately, Wilder Girls explores the complexity of female friendships and dramatizes the journey girls must endure if they are to control their own destinies. Given the current reality, where a warming planet threatens life as we know it and leaders charged with protecting us demonstrate questionable competence and honesty—this may be the perfect coming-of-age story for our time.