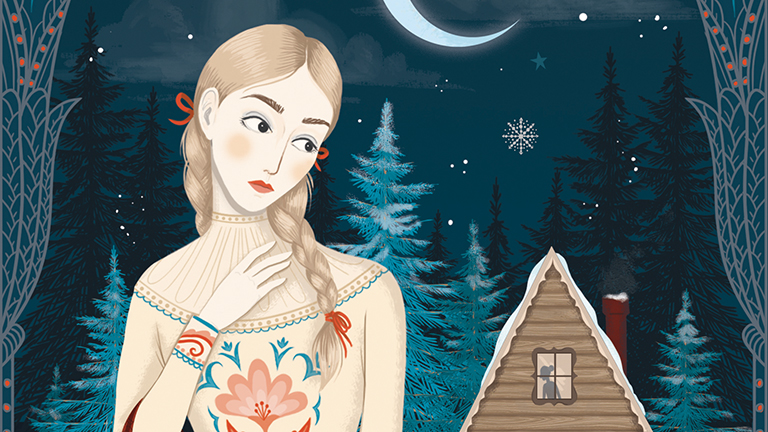 In The Bear and the Nightingale, Katherine Arden ’11 brings to life the fairies and demons of Russian folklore through the eyes of a bold young girl who takes on the worst of them to protect her village. Set in a vast and wintry wilderness where darkness and fear are more plentiful than warmth and food, this debut novel begins with the family gathered around the hearth for the much-needed distraction of a favorite fairy tale about Morozko, the frost demon.

Later it becomes clear that these traditional tales are more than just stories shared by firelight. Vasilisa, whose mother has died in childbirth, appears to have a magical gift, passed down from her grandmother, that allows her to see and speak to the house demons and woodland creatures who live amongst the people. The villagers leave offerings for these mysterious beings as a way to keep the peace of daily life.

Too soon, though, that peace is disrupted. Vasya’s father returns from Moscow with a new wife, Anna Ivanovna, who appears also to have the gift. Unlike Vasya, though, who embraces her role as a liaison between the mortal and the magical, Anna is terrified and driven nearly insane by the ever-present elves. She forbids any talk of fairies among the villagers and brings in a young priest to reinstate a Christian obedience. Not surprisingly, this doesn’t go over well in the otherworld, and the village is swiftly plagued by harsh weather and dying farm stock. Life becomes bleaker than ever.

Arden’s creative grasp of the intricacies of the Russian language, feudal history, and folklore lend depth to the story. She even includes a glossary for those caught up by the many Russian references, both human and magical. There are enchanting water nymphs and impish demons, sage talking horses and feuding demon brothers, and a priest who wrestles with his faith. The Bear and the Nightingale of the title don’t become known by name until later in the novel, and things move quickly from there. As the first in a trilogy, this novel will surely leave readers ready and waiting to find out what’s next for Vasilisa Petrovna and her role in the ongoing fairy tale.