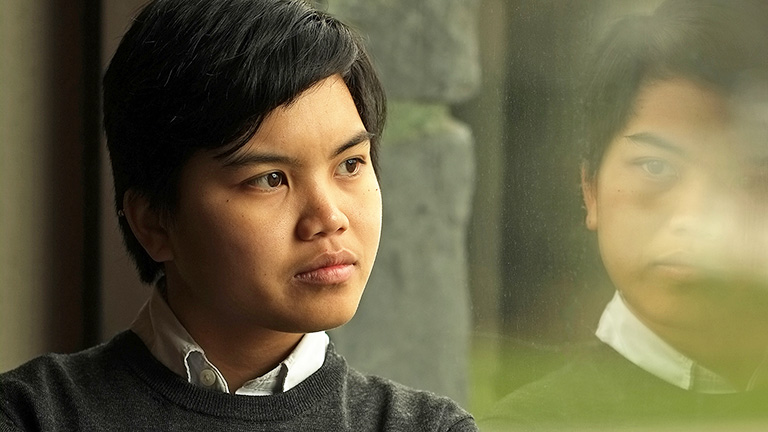 Gabbie Santos ’17 is an international politics and economics major who hails from the Philippines (the municipality of Silang in the province of Cavite, specifically). In November, he was selected as the student speaker for the annual TEDxMiddlebury event, the theme of which was “Playing the Game.”

In an 18-minute presentation titled “Go Big and Call Home,” Gabbie spoke about his experiences as a transgender male and expressed the hope that the audience would “think critically about the consequences of ‘winning,’ and to see that everyone is playing the game. Perhaps by raising our consciousness and questioning what we do to fit ourselves into this scheme,” he said, “we can find agency in rewriting the rules of this game that we play.” At its conclusion, he received a standing ovation. He recently spoke with Matt Jennings about the occasion.

I understand that going into the student speaker competition, you gave yourself more motivation than just winning a slot.

That’s right. I told myself that if I was selected, I would come out to my parents, and that decision gave my 18-minute talk more personal meaning.

Was there any point that you doubted whether that was the right thing to do?
Come out to my parents? No, I didn’t doubt it because it had been eight years since we had talked about this topic and every summer I go home, I had been asking myself, you know . . .

Is this the time?
Yes. And, you know, it just didn’t feel fair to speak to a broader audience about my identity without telling my parents first.

What did they say?
They weren’t surprised. They still love and accept me. So, for the most part, it went well. There are some things we still have to talk about, mostly with regards to transitioning.

What was the reaction on campus?
I was very humbled by how warm the audience was. They were—it just felt like some people in the room were my friends, and so I was expecting to feel that support, but in the days following, there would be people who would come up to me and say, “You know, that was a really good talk. Thank you for sharing.”

I imagine it gave others courage to have those difficult conversations, or to at least think about how they want to be perceived.
I would like to think so. One thing I tried to do at the end of my talk was to make it clear that this isn’t just a transgender issue or an LGBTQ issue. It’s every single one of us; we’re tied to these gender norms and expectations from society. It’s just that I have become so much more cognizant of that just because of the way I have to, you know, play the game.

Do you envision a time when you don’t have to play the game anymore?
I guess when I reach the point in my transition that I feel comfortable, maybe that will be analogous to “winning”? But at the same time, there’s always this question of how can I deny my past? I can’t; it’s part of my life. I think where I’m at right now is trying to be kind to that person, to remember that person, while also moving forward with being who I want to be.

It strikes me that you are in tune to the human condition in a way that not everyone your age is.
My parents definitely played a part. School played a part. Where I went to school, there was a strong emphasis on what is called “servant leadership,” this idea of forming leaders, not to become superior, but really to be of service to others, and that’s stuck with me since.

I get the sense that you will become a role model for a lot of people.
It’s very kind of you to say that. When the topic of LGBTQ and identity started to come between me and my parents, they would tell me, “People look up to you. You have to recognize that.” And there wasn’t value judgment per se, but one thing I told them when we had this recent conversation was: Don’t worry. I am very much appreciated by my community.