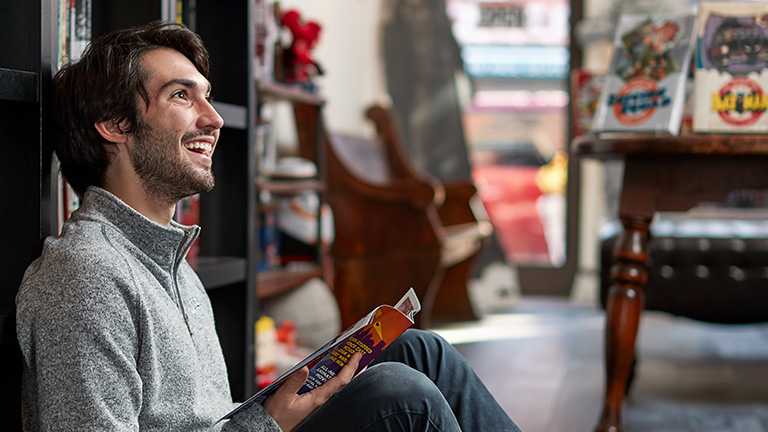 Millennials have a reputational rap sheet a mile long. They speak in emojis. They still live with their parents. They’d rather marry their start-up company than a soul mate, and they disdain conformity.

For instance: “I was never interested in a standard nine-to-five job,” says Cade Schreger ’15. “I always wanted to create my own thing, to design my own content and schedule. Not that there’s anything wrong with working for a boss, I just knew I’d be happier working for myself, developing a business plan I was passionate about.”

Schreger is the co-owner of Brooklyn’s newest comic book shop, Mama Says Comics Rock, and if the idea of a millennial comic-book-shop owner—in Brooklyn—seems to confirm every negative stereotype you’ve ever held about the millennial generation, you’d be forgiven. And quite possibly wrong.

While Schreger may be an alum of Brooklyn Heights’s arts-oriented St. Ann’s School—where grades aren’t distributed and creativity is highly rewarded—his off-the-beaten-path sensibilities have always had a grounding in reality. Which is why his father, a well-known lawyer and Brooklyn native, first chuckled at his son’s entrepreneurial notion and then quickly started talking business strategy.

“Our conversations went from ‘Oh, wouldn’t this be nice,’ to ‘Here’s how this actually could work,’ and eventually ‘Here’s how this will work,’” says Schreger of his discussions with his father. (One of the biggest factors, both Schregers say, was the closing of Bergen Comics in nearby Park Slope. The store’s owners plied Schreger and his business partner with advice—and delivered a community hungry for a new store.) Just six months later, Mama Says Comics Rock—adorned with DIY urban decor, bright white walls, and hundreds of comics—opened.

Perfectly at home among the mom-and-pop shops in Brooklyn’s Cobble Hill, Mama Says has received a warm welcome. “The community has been nothing but kind,” says Schreger, who is focused on catering to the area’s dense population of young families. Growing up in Brooklyn Heights, Schreger frequented local comic shops, drawn to both the amicable comic crowd and the supply of books that nurtured his obsession with Batman. Aware of the “nerd-in-the-basement” stereotype, Schreger also appreciates how comics unite readers across genders, ethnicities, and social classes.“What I’ve always admired about comics is the culture and community, especially from the readers,” says Schreger. “I’ve been amazed that almost everyone who walks into our store is not only nice and approachable, but genuinely loves the world of comics, and how it can be this bridge between prose and artistic expression.”

To succeed, Schreger knows that his store must be community oriented, which is why Mama Says features the work of local artists along with your standard Marvel and DC Comics fare and also holds regular events. (In September, the shop hosted the 10th anniversary celebration for a graphic novel imprint, First Second Publishing, which is a subsidiary of Macmillan.) “Our goal is to create a place where people know they can go to find comics, hang out, and bring their kids, or meet up with other people inside the community,” says Schreger. “If we can provide a little break in somebody’s day, even if it’s just five minutes of relaxing conversation, it’s worth it.”

A neuroscience major, Schreger is fascinated by the psychology of human behavior, and he says that his interest in human interaction has made retail a natural fit. As for running a business, he says that Mama Says is meeting his early financial goals, though he declines to say what those are. The shop had a very good holiday season, and as Mama Says approaches its one-year anniversary, Schreger is cautiously optimistic about its future. Which is a rather conventional thought—for a millenial. 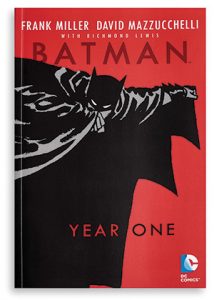 Since its release in 1987, Batman: Year One has been considered the premier origin story for the caped crusader, who also happens to be the first comic book character Schreger fell in love with.

Schreger’s co-owner is his childhood best friend, Davey Kourtesis, an Emerson College grad. And while many advise to keep work and personal life separate, Schreger and Kourtesis wouldn’t have it any other way. “Spending a lot of time together could drive two friends crazy,” says Schreger. “But Davey and I have never had that problem, personally or professionally. That’s something I’ll never take for granted.” 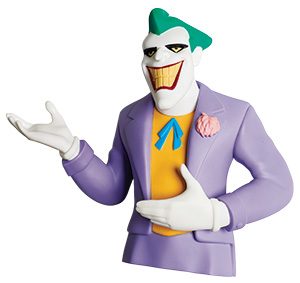 The Allure of Evil

While Batman may be Schreger’s first love, it’s the Joker who has stolen his heart. “Whether it’s the complex craziness of his psyche, the number of different takes on his character, or the way he affects all of the other players in the Batman universe, the Joker has always been a character that I’ve been drawn to and constantly want to learn more about,” he says.