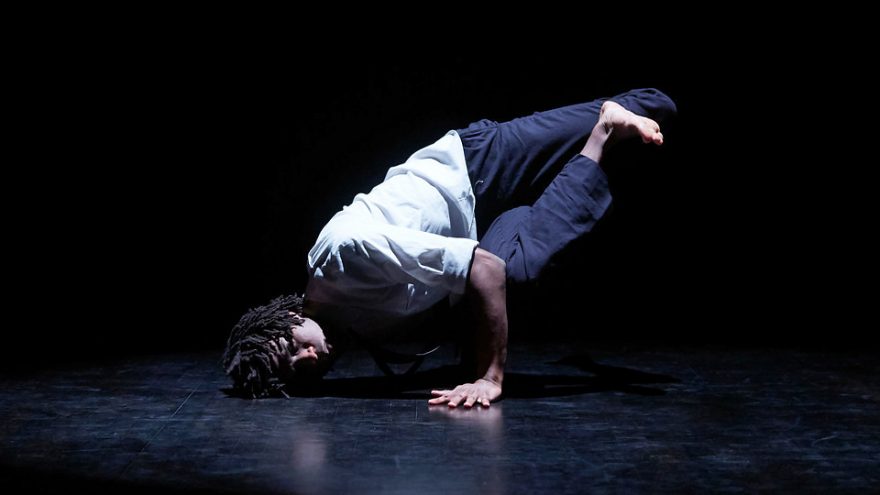 When he first got the news, Cameron McKinney ’14 excitedly called his mother and told her, “It feels like everything I’ve been building since I was 13 has led up to this.”

The “news” was that McKinney—and Kizuna Dance, the dance company he founded just after graduating from Middlebury—would be performing in Japan during the Tokyo Olympics in the summer as part of a 2019–2020 Creative Artist Fellowship from the U.S. Japan Friendship Commission. The fellowship, created to celebrate the building of U.S.-Japan relations through the arts, would involve three trips to Japan where McKinney, and later the company, would collaborate and perform with a Japanese company, Dance Barbizon, during the Summer Games. For Kizuna Dance, which bills itself as “celebrating Japanese culture through contemporary dance,” this was huge.

In February, as part of the fellowship, McKinney traveled alone to Kobe, Japan, to collaborate with Dance Barbizon’s principal dancer for a performance at the Japanese ambassador’s residence. And, had things gone as intended, McKinney would have returned to Japan in April for three weeks to work with his Japanese counterpart, choreographer and head of Dance Barbizon Toru Shimazaki. The two were to create a half-hour-long dance piece that McKinney would have brought back to share with his dancers in New York. Then, in August, the whole company would have traveled to Japan for the big performance.

But in March, COVID-19 hit. McKinney’s solo trip in April was canceled, and both the Olympics and the performance were postponed.

Though he admits he was devastated by the change in plans, McKinney has a habit of turning obstacles into opportunities. He has a motto—“Create your own luck”—and living by those words has brought him a long way. In fact, it’s how he came to start Kizuna Dance in the first place.

McKinney’s affinity for Japanese culture goes back to his middle school years, when he began studying Japanese. This love for the language later drew him to Middlebury.

His experience with dance, on the other hand, was limited to admiring the dancers in movies like You Got Served and Step It Up. Thinking that college was a good time to “reinvent” himself, he decided on a whim to give dance a try. As a first-year he auditioned for—and was accepted to—Riddim, Middlebury’s student-run world dance troupe. He still seems surprised.

“I don’t know what they saw, because I couldn’t learn choreography,” McKinney says with a laugh, “but they took a chance on me. That was my first serious dive into learning any kind of dance.”

Next, McKinney auditioned for the Dance Department’s “Newcomer’s Piece,” an opportunity for students who had never performed on stage before. McKinney shakes his head when he describes his audition: “I had an arm wave and a ‘tutting’ thing”—think King Tut—“that I had learned from YouTube, and I did those same two moves over and over again.” Somehow, he charmed the judges and was accepted.

“They were very welcoming. That’s just how the community is. And that’s how I got hooked,” he says.

Though McKinney insisted to his fellow dancers that he was going to become a politician, he ended up declaring a joint Japanese/dance major. Then, the summer before his senior year, he went to the Bates Dance Festival in Maine. “After that experience,” he says, “I was like, ‘I could definitely do this as a living.’” From there he began traveling back and forth from Middlebury to New York, performing in small showcases and “trying to get an idea of what the scene was.” A couple days after graduation, he moved to the city.

He went to auditions for all the big companies, “because everybody does.” But a lack of ballet training kept him from landing jobs. He kept being told, “You’re a beautiful mover, but you don’t have the technique we’re looking for.”

At this point, many aspiring dancers would have given up. Instead, McKinney started his own company.

“I had to,” he says, shrugging. He explains that his experience at Middlebury helped him make the decision. “In my time there,” he says, “there was such a focus on not only dance and history and things like that, but also on creating your own voice and creating your own space.” Founding Kizuna Dance “was a way of me saying that I believed that my art and my movement—even as it was six years ago—were as valid as these other people’s.” The company also gave him control of where and when he performs.

Through the company, McKinney combines his two passions: dance—specifically street dance and contemporary floorwork—and Japanese culture. And in just six years, McKinney and his troupe have accomplished a lot, including landing numerous fellowships and commissions, performing in the U.S. and abroad at prestigious institutions and festivals, and leading workshops and residencies in 15 states and several countries.

When it comes to Kizuna Dance’s success, McKinney is quick to credit his Middlebury professors and colleagues for continuing to “take a chance” on him and the company long after graduation, encouraging him and helping him make connections. But a lot of it comes down to McKinney’s talent and drive. It doesn’t hurt that he’s upbeat and friendly. And fearless.

When not performing and working as artistic director of the company, McKinney teaches dance. This spring he worked as an adjunct lecturer at Queensborough Community College and a visiting lecturer in dance at Princeton. “Oftentimes you have to prove yourself before they bring your company out. So the teaching has been a way for me to prove myself in a way that I actually know what I’m talking about, and then they bring the company out later.”

As for Kizuna Dance, McKinney says, “We’re in a little bit of freefall. The fellowship is very much still happening, and we’re all slated to be in Japan for the 2021 Olympics. But we kind of have to work backwards now and figure out where it’s actually happening and what dates and everything like that.”

In the meantime, the company has been doing a series of online performances and is launching an online platform that will offer free classes and movement tutorials. McKinney is teaching some open-air classes in his neighborhood and is developing a new, socially distanced work to be held in a large outdoor space in Greenport, New York. “We’re still making things. We’re not just sitting down,” he says.

He’s optimistic about the future of Kizuna Dance. “But I’ll be honest,” he says. “A lot of it just really sucks, for the moment.”