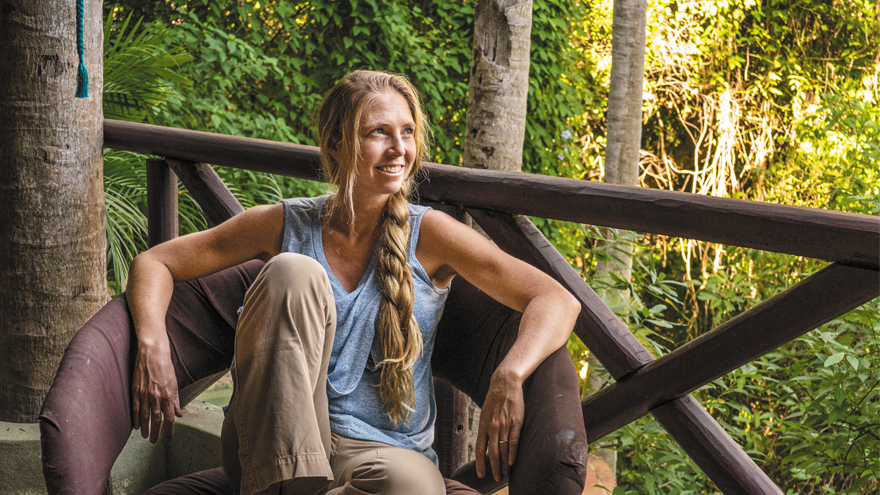 Tamara Jacobi ’06.5 is paddling out to catch a wave at Burros, a popular surf break near the town of Punta de Mita, Mexico. She’s grinning, chatting in Spanish to other surfers, and enjoying a day off from her usual duties at Tailwind Jungle Lodge, the ecoresort she runs in the jungle above San Pancho, a sleepy town an hour north of the bustling resort hub of Puerto Vallarta, on Mexico’s Pacific coast.

Tamara was the one who had the vision for an adventure-oriented, back-to-the-land retreat nestled into a grove of palm trees on the five-acre property her parents had bought in Mexico in 2005 as a retirement investment. During J-term of her senior year at Middlebury, Tamara took a course called Entrepreneurship 101, where she was tasked with writing a make-believe business plan.

She’d studied sustainable development abroad in Australia and had fallen in love with the idea of ecolodges. So, instead of writing a pretend business plan, she wrote a real one. “The inspiration started to flow,” Tamara says. “We had this land. It was the beginning of the ecotourism movement in Mexico. I figured, why don’t I write my own business plan?”

During graduation weekend in February 2007, she presented the plan to her parents, Tigre and Judi Jacobi, in a PowerPoint slideshow in her dorm room. They were in. But first, to celebrate Tigre’s 60th birthday and Tamara’s college graduation, Tamara, brother Rhett, and their dad set out to paddle sea kayaks 800 miles along the coast of Baja. Because that’s what the Jacobi family does for fun.

Raised on a lake on the Quebec-Vermont border, Tamara grew up with wandering, adventurous parents. Her dad worked as a builder; her mom was a teacher. As a kid, she lived in Mexico for a year, studying Mayan ruins and climbing the country’s highest peak. Her family backpacked California’s 220-mile John Muir Trail and Vermont’s 270-mile Long Trail, and the summer after her first year at Middlebury, she and her family mountain biked 2,000 miles along the Continental Divide.

So starting a family-run ecolodge in a country that wasn’t their own didn’t seem too ambitious. Tamara spent much of their two-month-long paddle through the Sea of Cortez daydreaming to fine-tune the plan for the lodge. That’s where she came up with the name, Tailwind: “Life is always much more enjoyable with the wind at your back,” she says.

Back on land, the family hand-built palapas and wooden platforms for rustic canvas safari tents that overlooked the ocean. In December 2007, they welcomed their first guests. Later, they installed a yoga deck and began hosting yoga retreats, and the business expanded.

Tigre and Judi work side-by-side at the lodge, but from the start, Tamara took on the role of CEO and manager. She says it’s been a lesson in flexibility. “You don’t know how things are going to unfold,” Tamara says. “It’s been a challenge, but it’s also made me adapt.”

This February, Tamara is publishing her first book, Wildpreneurs, which describes her journey to open her family business. “Guests at the lodge kept asking me, ‘What advice would you give to someone who wants to do this?’ So I started writing it down. But I realized it wasn’t just my story. There are all these people who are doing businesses outside the box without a recipe whose advice I added.”

In October, Tamara and her partner, Walter, a marine biologist, welcomed their son, Zephyr. Zephyr will grow up much the way his mother did: wandering the world with active, curious parents. His home base, however, will be a treehouse lodge deep in the jungles of Mexico.

Tamara gives these glass hearts, made in Mexico, as gifts to inspiring people who stay at the lodge. “They represent a jungle love that unites us—a love of the natural world and a community of mindful adventurers,” she says. “These hearts are also a reminder of the tremendous lessons that the jungle has taught me.” 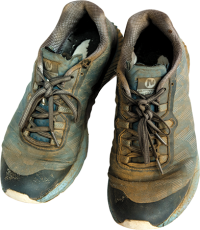 Running has always been therapeutic for Tamara. It’s where she finds herself most at home, no matter where in the world she is. “My life has been about blazing my own trail,” she says. “I am most inspired and happy when I’m on the trail, literally, and my running shoes come with me everywhere, from the jungle to the Colorado Rockies to Vermont’s Green Mountains. Whether I’m walking, running, or hiking, these shoes bring me tremendous joy and clarity.” 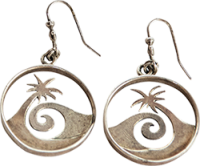 These earrings were a Christmas gift from her father in 2009, a couple of years after Tailwind Jungle Lodge opened. They were custom made by a jeweler in San Pancho, Mexico, into the shape of their lodge’s logo. “For me, this is so much more than just a logo. It represents our journey as a family business,” Tamara says. “Though we are grateful for the tailwind that guides us along, it’s been a challenging journey that has repeatedly tested us and made us stronger.”