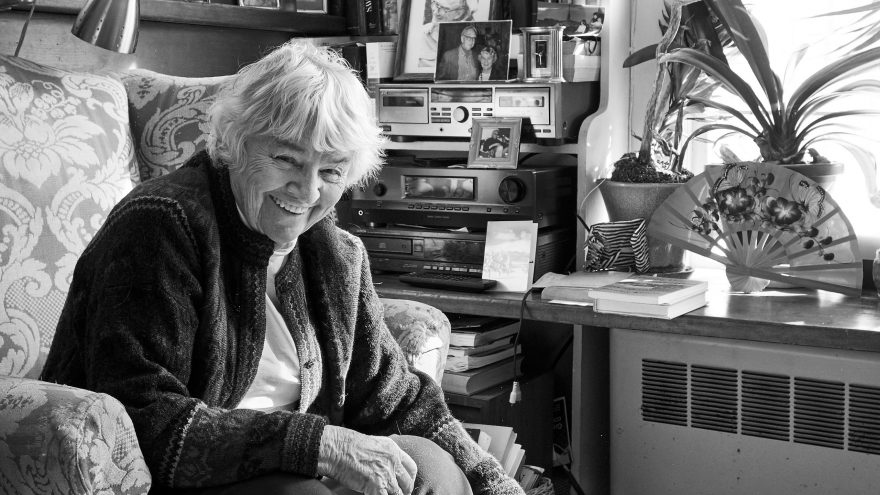 The first time journalist Barbara Cummiskey ’52 met Grey Villet, it was in the lobby of the Beverly Hilton Hotel. He’d been assigned to photograph a story she was developing and was seated on a couch, surrounded by cameras and wearing old jeans, sneakers, and a wrinkled denim shirt. After she sat down next to him, he stood up to his full six-foot, four-inch height and, peering down his nose, said in a rich South African accent, “I suppose you want a martini?” Inwardly she groaned. She was going to have to put up with this attitude for the next several weeks?

Thus began their love story. The year was 1961 and Barbara was among a small number of women reporter-writers at Life magazine. She had pitched a series of three stories about what it meant to strive for the American dreams of fame, wealth, and success—goals that too often ruin lives. She had the perfect subject for success: Victor Sabatino, the owner of a national line of foam-rubber-furniture stores. Sabatino was developing stores in California. As a “natural” for such a story, Grey, then Life’s bureau photographer in Los Angeles, was assigned to it. “After he ordered that martini for me and a pot of tea for himself (the second put-down!), I explained what I hoped we might accomplish with Victor. We spent a day with Sabatino, and I could see from the way Grey began shooting the story that he totally understood its essence. That night, when we got back to the hotel, he walked me to my door, kissed me lightly, and told me I was going to marry him. After three more days of working together, I agreed.”

Barbara and Grey were the perfect collaborators, sharing an almost electric sympathy. They recognized that to get to the truth of any essay, they had to be low-key in their approach in order to let people tell their own stories. They chased stories that were intensely human, showing what makes people tick and what drives them to follow a life’s passion. Working together until Life folded in 1972, they produced some of the finest photographic essays to appear in the magazine. Their first, the Sabatino essay, appears in Life’s Great Essays.

Everything changed after 1972. “The years after Life ended were hard,” Barbara says. “I sold real estate, he built houses. Slowly the importance of Grey’s work to photojournalism was fading.” When Grey died in 2000, Barbara had a new goal. “It became my raison d’être to make sure his legacy stayed alive and to preserve at least its essence.” Her first stop was the Life archives, to see what photographs she wanted to preserve for books and exhibitions.

Then in 2012, Nancy Buirski did a documentary on Richard and Mildred Loving, the interracial Virginia couple behind the Supreme Court decision that invalidated laws prohibiting interracial marriage. Grey had done a photo shoot with the Lovings in 1965 for a Life story. He had eventually given many of the photos to the couple, and their daughter shared them with Buirski, who, knowing Grey was dead, hadn’t bothered to get permissions to use them. “When I learned about the documentary and the photos, I hired a lawyer and informed Buirski that if she didn’t credit Grey BIG, I’d sue,” Barbara says. Buirski complied. Once director Jeff Nichols saw the documentary and Grey’s stills, he was inspired to create the movie Loving, which came out in 2016.

At that time, Barbara was completing a 2016 retrospective of Grey’s work at Bethel Woods Center for the Arts, located at the site of the famous 1969 Woodstock concert. She acted as cocurator and author for the exhibit. Barbara was also completing a book combining Grey’s Loving photos with her own text, as she had done so many times before.

After 16 years, Barbara feels she has accomplished what she set out to do. Through her perseverance, Grey’s artistic legacy has been saved.

Barbara did not set out to be a journalist when she left Middlebury with a degree in American literature. She meant to be a teacher and earned a Ford Foundation scholarship to attend Harvard. She earned her MAT but was heavily influenced by one of her professors, Albert Guerard, who was in the French Resistance during World War II. His German counterpart was Conrad Kellen, head of Radio Free Europe (RFE) in New York City. Guerard suggested she go to work for Kellen. At 23 years old, she was working the Czech and Hungarian desks and had the side assignment of being RFE’s reporter at the UN.

After Life folded, Barbara and Grey produced several books together, including this one on South African history and its grief, which was named a Time Notable Book of the  Year in 1980 and nominated for a Pulitzer.

One of Barbara’s first tasks in preserving Grey’s legacy was to sit in the basement of the Time-Life Building in NYC, going through Grey’s assignments for Life. The search yielded  thousands of images of historic and aesthetic importance, which she has archived in print and digital form. Thousands more ranging over a full spectrum of the final decades of the 20th century remain to be digitally preserved.