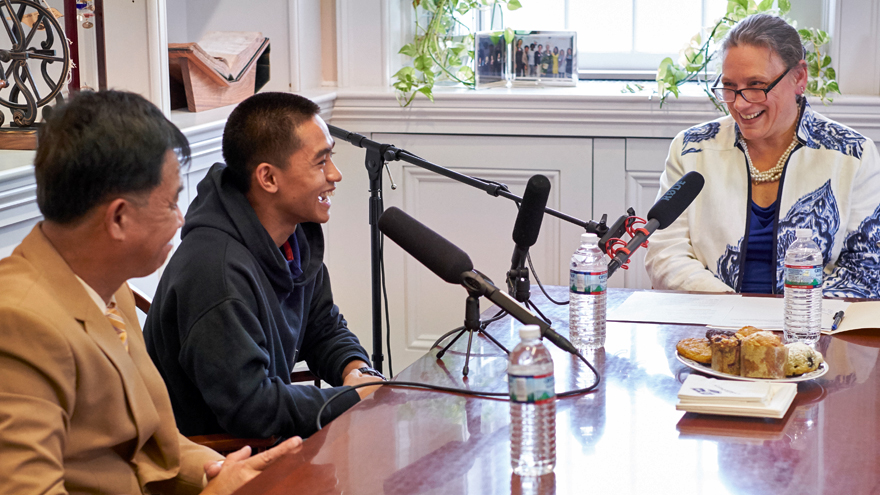 “In this modern day and age, the world is rapidly changing and globalizing. So he believes that it’s important not to teach only two languages but three or four. And it’s very important to keep in mind the context, and the location, and the region in which the school is located to tailor to those language needs.”
—Mr. Punnawit Thepsurin, interpreted by Pim Singhatiraj ’21.5

Intro: After I graduate, I want to see my children in school. And [they] can speak many languages.

LP: You’re listening to Midd Moment, a podcast of ideas from Middlebury’s leaders, independent thinkers who create community. I’m Laurie Patton, president of Middlebury and professor of religion. With me today are two very special guests.

Adul Samon, the inaugural recipient of Middlebury’s Global Citizen’s Award, and the director of the Ban Wiang Phan School, near Chiang Rai, Thailand, Mr. Phunawhit. On June 23, 2018, Adul Samon and his soccer team set out on a short cave exploring trip, when they became trapped due to rapidly rising waters from heavy rain.

After 10 days in utter darkness without a sign of being rescued, British divers finally found the soccer squad, but it was Adul who stepped into an unexpected leadership role during the rescue operation. At just 14, Adul’s proficiency in five languages allowed him to translate between the English-speaking rescue divers and his Thai teammates.

As the brave interpreter, he asked questions and kept his friends informed, and all 13 members of the soccer team were safely rescued over the course of several days. Adul embodies what the Global Citizen’s Award is all abou: a person who, through their communication skills and compassion, is able to change the world with no expectation of being in the limelight.

Of course, it takes mentors like Mr. Phunawhit and Adul’s other teachers for a person like Adul to grow into someone who works selflessly for others. Because of a number of external circumstances, the team requested that we not discuss the cave experience, and we honored that request. Together, we shared a conversation about the power of language and education.

Thank you so much to our interpreters, Pim Singhatiraj, Class of ’21.5, and Jaab Veskijkul ’22, who were integral in allowing this conversation to happen. As a testament to his commitment to learning and practicing his language skills, Adul conducted the entire interview in English.

Adul, you spoke with me at lunch a little bit about how you learned your different languages, and I’m wondering if you could share that with me again now.

AS: I studied Burmese first. Yeah, I studied three years. And then I’m going to study Thai. Education for me is very important for me.

LP: I love this story. Tell me if this is accurate. So, you learned Wa from your family, and then Myanmar, Thai, and English with your pastor.
And part of that was reading the Bible, but perhaps also reading other things with your pastor.

LP: And then you learn Mandarin from your friends.

LP: That’s great. We should all be so lucky, that we have so many different sources of language learning. That’s wonderful.

Do you have a language that you like the best?

LP: English, okay. Well, in your visit with us here, you’ll get a lot of practice speaking English, and we appreciate your listening.

Mr. Phunawhit, one of the things that I have noticed about your school is that you teach four languages, and that is a wonderful thing. Many high schools don’t teach as many languages as you do. And you also welcome a number of different people from different ethnic identities. I was wondering how you built the school, both to become a school that people want to go to, as well as how you developed the language teaching in your school.

PS: Before he answers this, he wants to talk about how he made the school into a place where four languages are taught.

PS: He’s always thought that language is very important. He believes that if teachers have the knowledge of many languages and are able to teach this, the students will be successful in going on in their futures.

In this modern day and age, the world is rapidly changing and globalizing. So he believes that it’s important not to teach only two languages but three or four. And it’s very important to keep in mind the context, and the location, and the region in which the school is located to tailor to those language needs.

For example, Thai is a necessary language to be taught, because we are Thai. English is very important as well, because now English is the lingua franca of the world.

PS: He believes that Burmese is very important to be taught in school as well, just because of the border between Thailand and Burma.

He believes that Chinese is very important as well, because China is becoming a global power, and the influence of Chinese has spread to Southeast Asia.

The mission of the Ban Wiang Phan School should be to teach their students languages that will help them in their futures.

LP: That is so inspiring. When you educate students in languages, how do you see them change, and how do you see education having an impact on the high school students that you work with?

LP: One thing that strikes me is that most international schools are in cities. And what is very unusual about your school, is that it is more removed and within the mountains. And I wonder if that affects the way that you think about education or your school.

He believes that it’s especially important to offer these opportunities to students from less privileged backgrounds. That helps more impoverished populations. He believes that it’s important to offer the same level of education to them as to more privileged schools and privileged students in cities and urban areas, to be able to prepare the students, in order to be successful in their futures, whether it be in careers or future education.

LP: Your school has really grown. Where would you like to see your school in the next five to 10 years?

PS: The director believes that the school will grow in student population over the next five years. But he knows that the academic resources, and the buildings, and the teachers, the number won’t grow or increase.

Despite all of this, he really wants to push his goal, that all students within the next five years will be able to speak all four languages that are taught at the school.

LP: It’s such an admirable goal.

So, Adul, you’re still playing soccer. Is that right?

LP: And when you play soccer, what language do you speak?

LP: So you have Chinese with your friends. Thai, soccer. Do you speak English outside of class, or do you only speak English in class?

AS: So, I speak English with my English teacher.

LP: And Adul, when you think about your school five years from now, what would you like to see?

AS: So this is the last year for me. After I graduate, I want to [inaudible] my school, I want to see my children in school, and [they] can speak many languages.

LP: That’s wonderful, thank you. You’ll come back and be an inspiration for them as well.

Mr. Phunawhit, how does it feel to see your student confidently engage in an English interview abroad?

PS: The director is very proud of Adul. And he says that there are many wonderful students at the school, but Adul is something of a miracle in his drive for speaking languages.

The director would like to say that once Adul heads back to Thailand, he wants to push more English classes.

Adul, this is an unusual question. The thing that keeps me going is that I have one question that I will never know the answer to, and I’ll never get tired of asking. So I’m wondering if you have a question that drives you?

AS: A big question for me: How can I be a professional?

Mr. Phunawhit, do you have a question that you’re always asking?

PS: What do the things around him need from him? What can they do for their society and for their country? So he really believes in turning someone’s surroundings into something that can be beneficial towards them.

LP: We want to thank you for visiting us here and participating in our graduation exercises. And I also should just mention that it’s important for us at Middlebury to offer something to Adul’s school community. The College has established an initial three-year summer internship program, in collaboration with the Ban Wiang Phan School, and we will be sending interns to teach English there.

We hope that it will be the beginning of a very long partnership.

PS: He would like to express his gratitude for you, President Patton, and for Middlebury College in helping the Ban Wiang Phan School in this process. And also, he would like to emphasize how lucky the students here at Middlebury are to be at this world-class institution.

Mr. Phunawit: Thank you so much.

And we feel that you and your school are doing exactly that and are fulfilling the vision of Middlebury.

>> Hi, this is Erin Davis, producer of the show. Midd Moment is produced by myself and Juliette Luini, Class of ’18.5, with help from Chris Spencer. If you have a Midd Moment to share, a time when things came together in a particularly Middlebury way, share your memory on social media using hashtag #MiddMoment, or record a voice memo and email it to us at middmoment@middlebury.edu.

We’d love to include your Midd Moment in a future episode of the show. For more conversations like this, subscribe to Midd Moment on Apple Podcasts or wherever you get your podcasts. Thank you for listening.