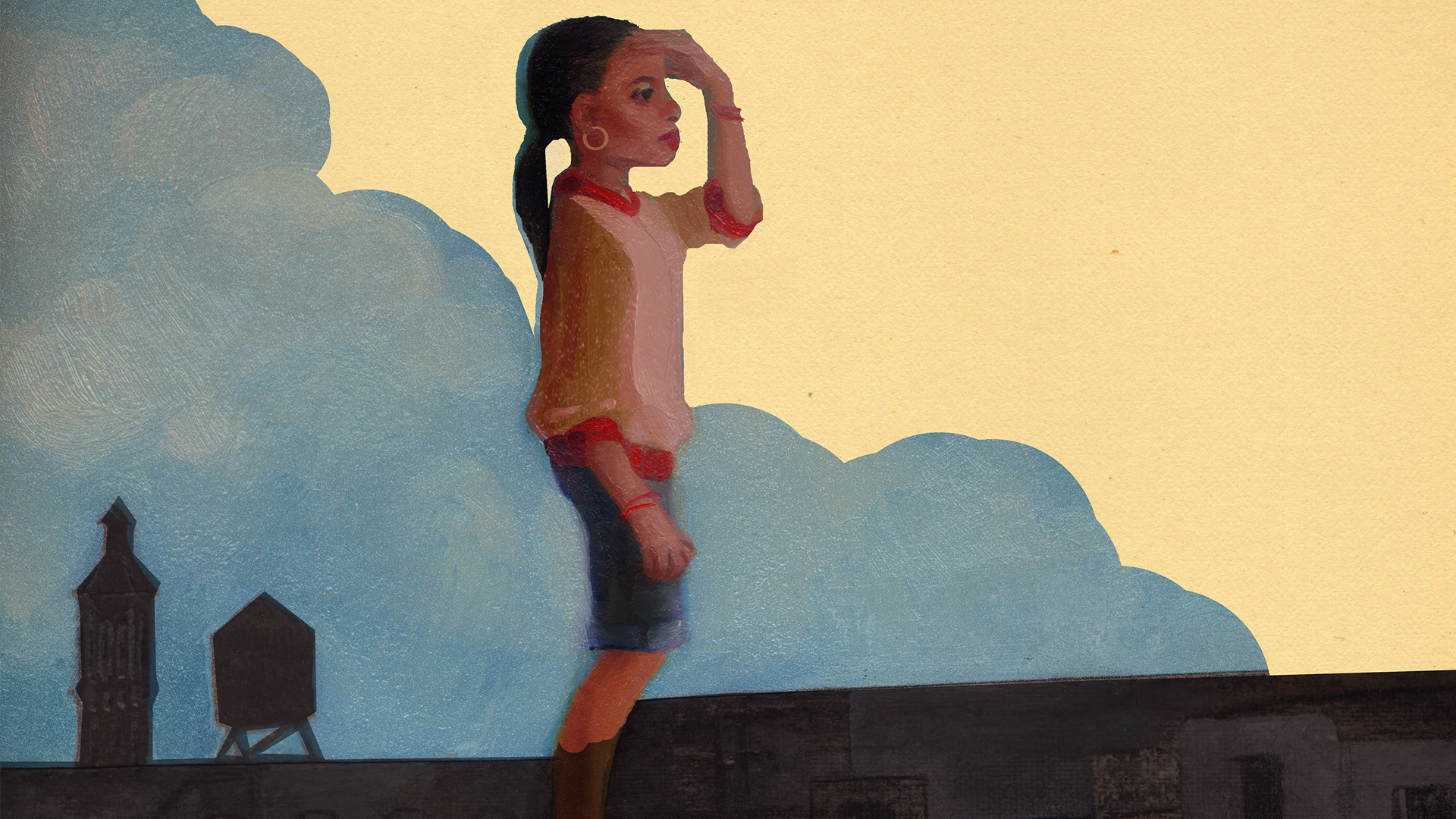 Editor’s Note, 6/2/20: This beautiful, insightful essay was written by Dena Simmons ’05 for this magazine in the fall of 2015, nearly five years ago; Barack Obama was still president. Its powerful message was so urgent then, so necessary. And now? It feels utterly inadequate to say it’s now more urgent. So, I ask that you please read this with the understanding that we were having this conversation five years ago, and the years and decades before that.—MJ

I grew up in a one-bedroom apartment in the Bronx with my two sisters and immigrant mother. On our stoop, neighbors socialized and celebrated with barbecues, domino games, and merengue dancing. These moments colored my childhood with the feeling of home. Yet I often went to sleep to the sound of gunshots. In those moments, I remained stiff in bed for fear of being discovered by the darkness outside. My building, the epicenter of the drug trade on my city block, was framed with sturdy metal railings that led to the entrance. I was nine years old when, one morning, I noticed that one of those railings had been dented with a deep groove, caused, my mother later told me, by one of our neighbors throwing his wife out a fifth-story window.

My mother, traumatized by the incident, lived in increasing fear that the violence my sisters and I witnessed would overtake our lives—that our visceral poverty meant that the neighbors with whom we lived and shared space could harm us. We were tied to the Bronx, but my mother’s anxieties spurred her into action. She secured boarding school spots for us outside of the city, and soon my sisters and I were driving to Connecticut in a borrowed car to pristine, manicured boarding-school campuses with full scholarships—and fear—in tow.

The disparity between my Bronx home and the luxury of New England’s unlocked doors, abundant food, and quiet nights made me realize other forms of violence existed. Though we ran away to escape tragedy, I encountered new horrors: racism, classism, and the quiet violence of gender policing that happens at a prestigious all-girls boarding school. I discovered that my all-girls school was not really for all girls. I received many tips about the nature of my clothes and the right way to speak. I learned I did not measure up to my peers. I came to believe that if my future stood any chance of success, I would do well to heed the glances, the unsolicited advice, and the public shaming that were for my “own good” in order to grow into the “right” kind of woman. My Black body, with its large curves, unruly hair—as well as the scent of poverty still clinging to my clothes—made me a prime target for victimization from my peers, my teachers, and a system of education that privileges those who don’t look like me. Fearing persecution, I learned to erase myself as a way to survive.

With the new aroma of boarding-school pedigree now on my khakis, doors of opportunity, otherwise closed, opened for me. I now operated as an exception to the rule because I’d learned to be something other than me. But despite the good intentions of others, I still felt as if I did not belong. The course work that ignored my reality, the reminders of the charity bestowed upon me, or the gangsta-themed parties my peers threw made it clear I was in borrowed space. I suffocated with the pain of being treated as if I were invisible.

Even in the hallowed halls of privilege, even years after fearful nights in the Bronx, my safety continued to be at stake. I was—and am still—not safe to be my full, authentic self. I, along with so many Black people, am obsessively preoccupied with my safety and the protection of my humanity. For us, waking up is an act of courage, an act of resistance against the sanitization of our existence.

In some measures, I am light-years from that Bronx stoop. I work at Yale—at the University’s Center for Emotional Intelligence—and our mission is to use the power of emotions to create a more effective and compassionate society. In that vein, I have the honor of supporting educators to develop their emotional intelligence skills so they can create emotionally intelligent and safe schools.

And yet I still walk in the world in fear.

And, most recently, Sandra Bland and Sam Dubose.

I ask myself: If they were not Black, would they still be alive today?

If I were in their exact situation, would my name be on that list?

These are important questions to consider because they require us to reflect on the role of race in our society. For generations we have lived in a society built upon the interests of white individuals and the belief that white people are dominant and normative. The Reverend Dr. Martin Luther King spoke of the arc of the moral universe. He said it is long, but it bends towards justice. And while we, as a nation, have made strides since King’s assassination, some days that arc seems longer than ever.

Even with the election of our nation’s first Black president, the war against Blackness is alive and well. Events in Baltimore, Staten Island, Ferguson, Charleston, and Cincinnati have highlighted this. As an educator, researcher, and activist, I think about how people, especially young people, are digesting these events. I think ceaselessly about what Black youth and young people of color are learning about themselves, about their lives. Many consume narratives of violence every day—living this violence the same way I did as a child in the Bronx— through police brutality, poverty, gentrification, and systemic injustice. They learn very early that their personhood is suspicious and terrifying. They are constantly on the verge of becoming Aiyanna Stanley-Jones or Tamir Rice.

And this terrifies me.

After Middlebury, when I taught middle school students in the Bronx, I would use statistics to engage my students in conversations about race and activism. A 2014 study by the Civil Rights Division of the United States Department of Education revealed that Black students are suspended and expelled at a rate three times greater than white students. Additionally, multiple studies have found that Black students receive harsher punishments than their white peers for the same infractions.

This continues into adulthood. Black people comprise nearly half of the 2.3 million incarcerated Americans, and they are incarcerated at nearly six times the rate of white people.

I would look at my beautiful, curious students, and I would want to damn those statistics.

While I could not control the chaos of my students’ lives—the instability of their homes, the uncertainty of their next meal, the loud neighbors that kept them from sleep—I  provided them with a safe and loving classroom where they could not only learn but thrive. I taught them necessary survival skills like code switching, writing and speaking persuasively, and understanding how data and media can be manipulated.

The school where I taught—with its overcrowded classrooms, rodent infestation, lack of textbooks, overworked and sometimes disengaged teachers, and prisonlike school safety guards—sent children the message that their dreams could only live within the school’s metal window gates. So I took them out of those gates. We went on class trips to museums and libraries. We walked the campus at Columbia, where I earned my doctorate. And we traveled north to Vermont, to my dear Middlebury, because I wanted my students to know they deserved space at our nation’s finest institutions.

I taught my students how to create meaningful actions to challenge and change the problematic systems that they inhabit. And I equipped them with love, kindness, and acceptance so they could mediate the violence many of them were already experiencing. I showed my students they mattered despite everything else in their lives telling them otherwise. I answered the phone when they called. I listened when they needed someone to listen. I stayed after school when they were confused by something I had taught earlier. And I told them I loved them every opportunity I had. I also taught my students how to seek support and advocate for themselves—and for others. I included their narratives and stories into my lessons so they could learn to value and love themselves, so they could feel proud of who they were, and so they wouldn’t have to endure the trauma of erasing themselves as I did.

But this wasn’t enough. I continued to fear for my students’ lives at home and in school. And this fear is what motivates my life’s trajectory to ensure safety for all. It is the reason I researched teachers’ preparedness to confront bullying during my doctoral studies. It is why I now travel the country and world to equip adults and youth with the skills of emotional intelligence. It’s why I’m writing this essay.

My success does not demonstrate what Black folks can achieve. It’s a reminder of what is kept from us. And I have to own the many privileges I have that allow me to tell my own story and speak up against a system that benefits me.

I am a light-skinned Black woman, which means my Blackness is preferred over the Blackness of my darker-skinned sisters and brothers. I have greater proximity to whiteness, to the acceptable standards of beauty. I’ve also been granted access to prestigious networks of power through attending and working at some of the nation’s elite secondary schools and universities. However, I still do not have the privilege to walk in the world without fear for my safety. I am still Black. I’m still more likely to be subject to the structural violence of dilapidated neighborhoods, subpar health care, failing schools, over-policing, and—worse—the insidious brainwashing that manipulates Black people into hating and devaluing our own existence.

Even in this highly racialized environment, however, there’s room for healing and growth. I strive to do work that empowers others to realize their value and potential and to fight for justice. However, the work should not rest only on the shoulders of people of color. This work for racial justice is all of our work. It’s a collective struggle for our shared humanity. Racial equity is a national imperative that requires purging our hate of Blackness and revising the way our country functions.

We cannot shift our current state of affairs if we shy away from painful and difficult discourse about racial injustice. These conversations have the potential to enlighten us so we can prevent doing inadvertent harm through ignorance and implicit bias—so we can truly see each other, and so we can begin to heal.

We cannot afford to walk away, to turn off our screens, and to carry on with our comfortable lives. None of us, especially those in power, have the right to be comfortable. It’s through discomfort we learn and transform most. Questioning, challenging, and curbing racial injustices is everyone’s job.

All of us must be compassionate. We must be open to other experiences, and we must learn to accept others and ourselves for everything we are—and everything we are not. We must fight for ourselves and for each other. And we must begin to shift the violent course of history to one of peace, love, and mutual understanding. I have faith in us. What I ask is simple: for Black lives to be seen, to be acknowledged as human, to be treated with dignity. Our shared humanity depends on this.

Dena Simmons ’05 is the assistant director of the Yale Center for Emotional Intelligence. Follow her on Twitter: @DenaSimmons.