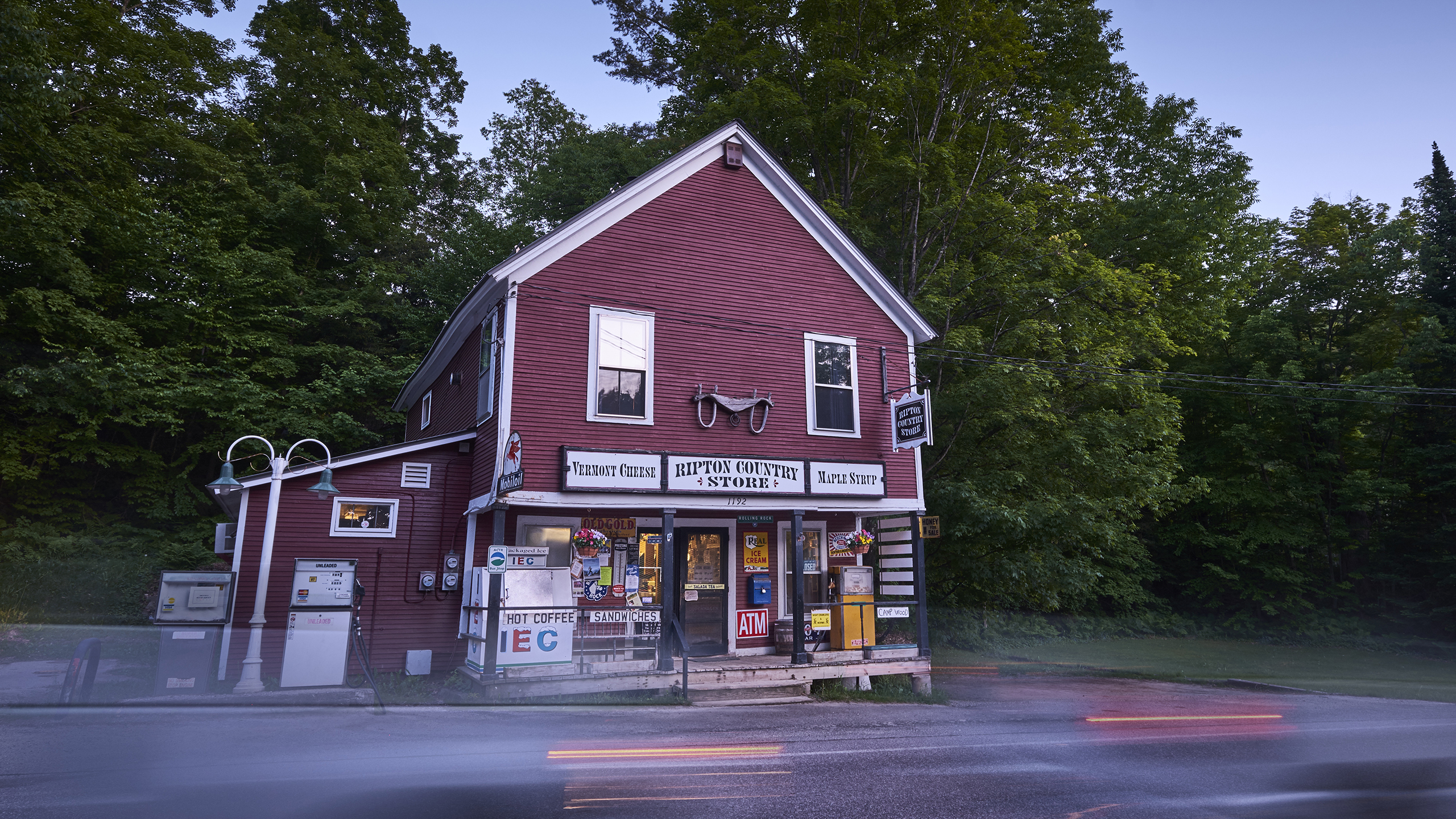 T he Ripton Country Store is perched on the  winding road between Middlebury College and the Bread Loaf campus, so traveling between the two or to the Snow Bowl—or really to anywhere across the Green Mountains—you have to pass this unobtrusive building at the bend in the road. Inside, the floorboards with their wooden, musty smell greet you, and as you walk the aisles full of everything from canned goods to maple syrup, you must watch your step so as not to bump into the plenty. As a college student and a Bread Loafer over the years, I didn’t buy staples there. Instead, the store was where I stopped for penny candy. Mostly I’d enter the shop with friends or with fellow Mischords when we were en route to a performance, and I would fill a small paper bag with as many Swedish fish as I was willing to count out individually. At the checkout, the owner would simply ask me the number to enter into the push-button cash register. Then I’d leave, accompanied by the final jingle of the front door. It was a small, infrequent transaction of less than a dollar but one that lodged in my memory as something about life in Vermont and life as it should be.

It was also the place referred to by many as the IEC store, since the old ice machine had had its letters put on in the wrong order by the delivery person. When a new machine was purchased years later, the old mistake was eventually reintroduced to help satisfy our desire for that quirkiness of place and a bit of nostalgia. I’ve also heard that bikers straining to pedal over the mountain pass are told about the IEC machine as a sign of reprieve, indicating a place where they can stop and rest.

I think about those jumbled letters in connection to my first summer at Bread Loaf in 1997 when I had won a student fellowship to attend the Writers’ Conference. Since I was still a Middlebury undergrad as well, I not only thought of that summer as a rite of passage—an early access to the writing world—but I also felt responsible as one of the few resident “locals” to share the best spots in the area. I took those I met on hiking trails at Texas Falls, and into town, and to the College, but, as we drove up and down Route 125, I also made sure that we stopped by the Ripton Country Store to see the IEC machine.

Sadly, it was also the road I drove when I returned to the College—it was 20 years ago this year—to mourn the far-too-early death of Middlebury student and friend Christine Guilmet. I had sung with her just months before at my final spring jamboree, but that December I returned over that pass as a graduate to attend her services at the College and then crossed it again to travel to her hometown, driving some of the current Mischords over that mountain in the blinding snow. We were all scared and shaken, and that precarious trip past the Ripton Country Store intensified what we were already feeling.

I also stopped at the store as I got older because the winding road up the mountain made me car sick one summer when I lived there. I’m not sure why the summer of 2003 caused such vertigo, but my future husband would stop with me at the store on our way down the mountain from the Bread Loaf School of English because it was a good place to pull off the road to help me recenter my breath and balance. The Swedish fish also became an excuse to stop for a moment of reconnection.

Even though I performed my last graduation walk years ago, I make sure to visit the store each time I am in Vermont, most recently during last fall’s Bread Loaf Writers’ Conference reunion and celebration of Michael Collier’s retirement. As I took in the store again, I didn’t know it would be the last time I would see it in its current owners’ hands, but it too was fitting. I was in the state to show the full distance I had come from being a student, not only now attending the conference as an “alum” but also because I was going to cross that mountain to be a guest speaker in Professor Brett Millier’s senior thesis workshop—for one of my own former teachers—now as a professional writer and teacher myself.

When I talk about the store with other alums, they all mention it as a place of transition and anticipation. Mostly, those who took that route as they drove to campus at the start of every term would talk about its appearance around the bend as a distinctive landmark. It stood as a marker that soon they would reach Middlebury and a return to college life. For me, with that excitement came a shift to ease. College, of course, had its many stresses, but it was also a place where I learned to relax into myself.

For that reason, the Ripton Country Store was a dear spot, although not my place for essentials, like bread or mail. I’m sure those who live in the town have much more intimate relationships with the store and with its owners. Even so, my initial encounter with one of the owners is what began my long-term affection. Not long after I arrived to college in the fall of 1994, my mother and I stopped at the store. My mother spied a photograph of a moose on the wall, and being from Pennsylvania, she felt a moose sighting was a new and exciting prospect of my living in Vermont. She asked where we could find a moose, and I, with typical teenage embarrassment, turned away at what I perceived to be a naïve question, because of course moose didn’t just hang out in one location waiting for our arrival. The woman behind the counter, however, was easygoing and kind to my mother, telling her a marshy spot just up the road that could be a possibility.

As we drove toward the anticipated site, my mother slowed the car. “See what you can see, Abby,” she said. I dutifully looked out the window and felt the doubt fall from my face. There in the reeds—right where the store owner had directed us—stood a majestic moose, unhurried by our gaze, just waiting for our arrival.

I’ve learned a lot crossing that mountain pass, and I hope that the Ripton Country Store and all of the benefits of Vermont will continue to remind me of the person I was and how it shaped me into the person I am.

Like many others across the country, Abigail Manzella first learned that the Ripton Country Store was going on the market when Bill McKibben, a Ripton resident and Schumann Distinguished Scholar at Middlebury, penned a beautiful tribute to the store and its owners in the New York Times in March. McKibben’s piece prompted both fond remembrances of the locale as well as fantasies about, well, buying the store and moving to Vermont. We hope that Abby’s piece prompts further memories and continues the conversation; we’d love to publish further sentiment in our Letters department in the fall issue.