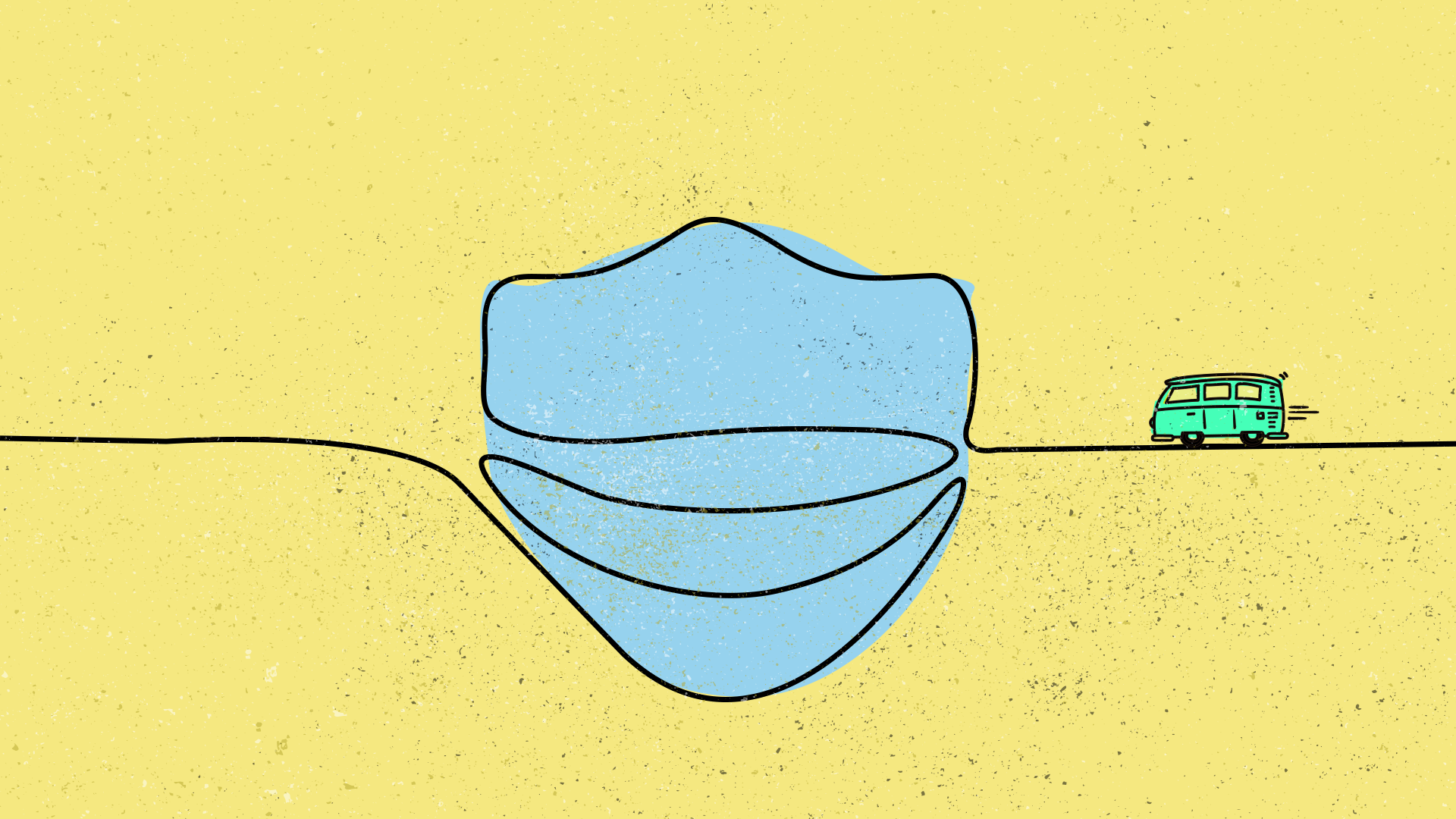 As I buckled my seat belt and turned the ignition, my mind was racing. Would our drive from the West Coast to northeastern Ohio in the midst of a global pandemic be safe? Or were we playing with fire? Armed with enough masks, wipes, and hand sanitizer to make my neighborhood Costco jealous, we crossed our fingers and hit the road.

Over the Fourth of July weekend, my brother Mark received a call from our mother’s doctor. Mom is in her 90s, suffers from dementia, and lives in an assisted living facility in Hudson, Ohio. The doctor had grim news: she was having an increasingly difficult time breathing, and he recommended she begin hospice care.

Mark shared this with me and our three other brothers on a Zoom call. Though we had grown up in Cleveland, the five of us were now spread out across the country. In normal conditions, our next step would be clear: we’d hang up the phone, head to our respective airports, and rendezvous in Ohio. But because of the pandemic, and the fact that a few of us have health issues of our own, we weren’t sure how to proceed. Mom’s nursing home had been in lockdown since March. Would it be a health risk to visit her there? Would we even be let in? And was it possible for us to travel across the country without getting infected? All we knew was we had to do something. We couldn’t let her spend what appeared to be her final days alone.

After a long discussion, and some long silences while we mulled our options, another brother, John, volunteered to drive to Hudson from his home in Phoenix. Flying there seemed too risky. After a pause, I offered to be his copilot.

Who knew what we would discover on our drive? Infection rates were climbing in the Midwest while, according to my social media feed, people there were burning masks in protest. I took a deep breath and packed my bags.

John and I hit the road early and wended our way toward Utah and Colorado. A few hours into our drive, in rural Arizona, we made our first stop to answer nature’s—and caffeine’s—call. As we adjusted our face masks in a Starbucks parking lot, we wondered aloud what kind of reaction we’d get from the anti-maskers who no doubt awaited us inside. To our pleasant surprise, all of the baristas and most of the customers had their faces covered, too. Frustratingly, however, the restrooms were closed. Same with the fast food joint and gas station across the street. Though I understood the logic, it put travelers like us in what you could call an uncomfortable situation. With a shrug and a quick look over our shoulders, we relieved ourselves behind a dumpster in the corner of the parking lot. I’m not proud of what we did, but there didn’t seem to be much choice.

For lunch, a few hours later, we stopped at a Subway in rural Utah. Though it’s a red state—as the big display stand of MAGA hats near the cash register made clear—the folks behind the counter were masked up, and the restaurant’s seating area was closed off with yellow tape. (The restrooms, thank the good Lord, were open.)

Driving cross-country entails stopping fairly often at gas stations. And gas pumps, of course, get touched by a lot of different hands in a day. The thing is, the coronavirus can linger on metal and plastic for up to 72 hours. The bottom line: gassing up during a pandemic can be a harrowing experience. So, through the course of our trip, John and I became adept at what we came to call the “gas station ballet.” Step 1: Grab a few napkins from our stash in the glove compartment. Step 2: Wrap the napkin around the gas pump handle so your fingers don’t touch anything icky. Step 3: Use a second napkin to protect your fingers as you enter your credit card information. Step 4: Discard the napkins and douse your hands with sanitizer. And if your supply of jerky is running low and you need to visit the gas station convenience store, bring another napkin for the door or, if you’re feeling adventurous, try opening it with your knee or elbow.

Early the next morning, we departed Boulder and headed toward St. Louis. The drive, like the Kansas landscape out our windows, was uneventful, though we were unnerved to discover that all of the McDonald’s along our route were closed. What did Mickey D know that the Burger King didn’t? We were in the heart of Trump country now, but at every rest stop we visited, all of the employees and most of the customers had their faces covered. Not a mask-burning ceremony in sight. I began to wonder about the quality of news I’d been receiving in my Southern Californian bubble and made a note to close my Facebook account.

For dinner, we visited a barbecue joint in Topeka. A man can eat only so many Subway salads, right? Though we had been taking all of our meals in our Honda up to this point, bolting ribs behind the wheel seemed like a bad idea. The problem? Almost none of the diners inside were wearing masks. We mulled the risk and reward of our situation for a minute until John brought us to our senses. “Screw it. That pulled pork smells delicious.”

We spent the night at a motel just off the highway in rural Missouri. Though the clerk behind the front desk was maskless, he assured us that the motel and our room were clean. I didn’t know how to interpret this dichotomy, but it was after 10:00 and we were too exhausted to worry.

Today’s goal: Hudson, Ohio, where our Mom lived. It was a Monday, and Route 70 was packed with semitrucks as we wended our way through Missouri and Indiana. Once again, most restaurants along the highway were closed, the exception being Arby’s, of all places. I don’t know about you, but my lips hadn’t touched Horsey Sauce since 1983. A trip like ours, clearly, would be tough for vegans.

That evening, we finally crossed the border into Ohio, and the landscape surrounding us transformed. Instead of mile after mile of flat farmland, we found ourselves in a lush forest with green, rolling hills. Dayton and Columbus, in contrast to St. Louis, Topeka, and Kansas City, seemed to sparkle with energy and optimism. It felt good to be back in our home state.

Tuesday, 7/14. Finally, we made our way to our mother’s assisted living facility. As we turned onto the long driveway to its main building, we encountered something unexpected: a homemade roadblock, like you’d see in a Mad Max movie. Gulp. Suppose the guard wouldn’t let us in, and our drive—all 2,000 miles of it—had been futile? Happily, when we introduced ourselves to him and explained our presence, he smiled, raised his gate, and let us pass.

That good news was a harbinger of what awaited us inside. The nursing home was clean and buttoned up, and everyone seemed healthy—and Mom was no exception. Though her doctor had been right and something was definitely up with her breathing, she seemed more focused than usual and ate like a horse. Conclusion: she might be in hospice care, but she wasn’t going anywhere soon.

So what did I learn from my three days on the road? The overwhelming majority of people I encountered were wearing masks, were practicing social distancing, and had plenty of hand sanitizer available. Though most of them probably vote Republican, they seemed willing to rise above the politicization of the pandemic and do what’s right. At least, that’s how I chose to interpret things. It’s been a tough year for all of us—the toughest I’ve ever encountered—but this insight gave me hope that maybe there’s a light at the end of this tunnel after all.

Best of all, we were with our mom, and she was doing much better than we had anticipated. After a long and tense trip, we felt like we could finally relax. But not too much—because in just a few days, we’d be getting back in our car and doing it again.