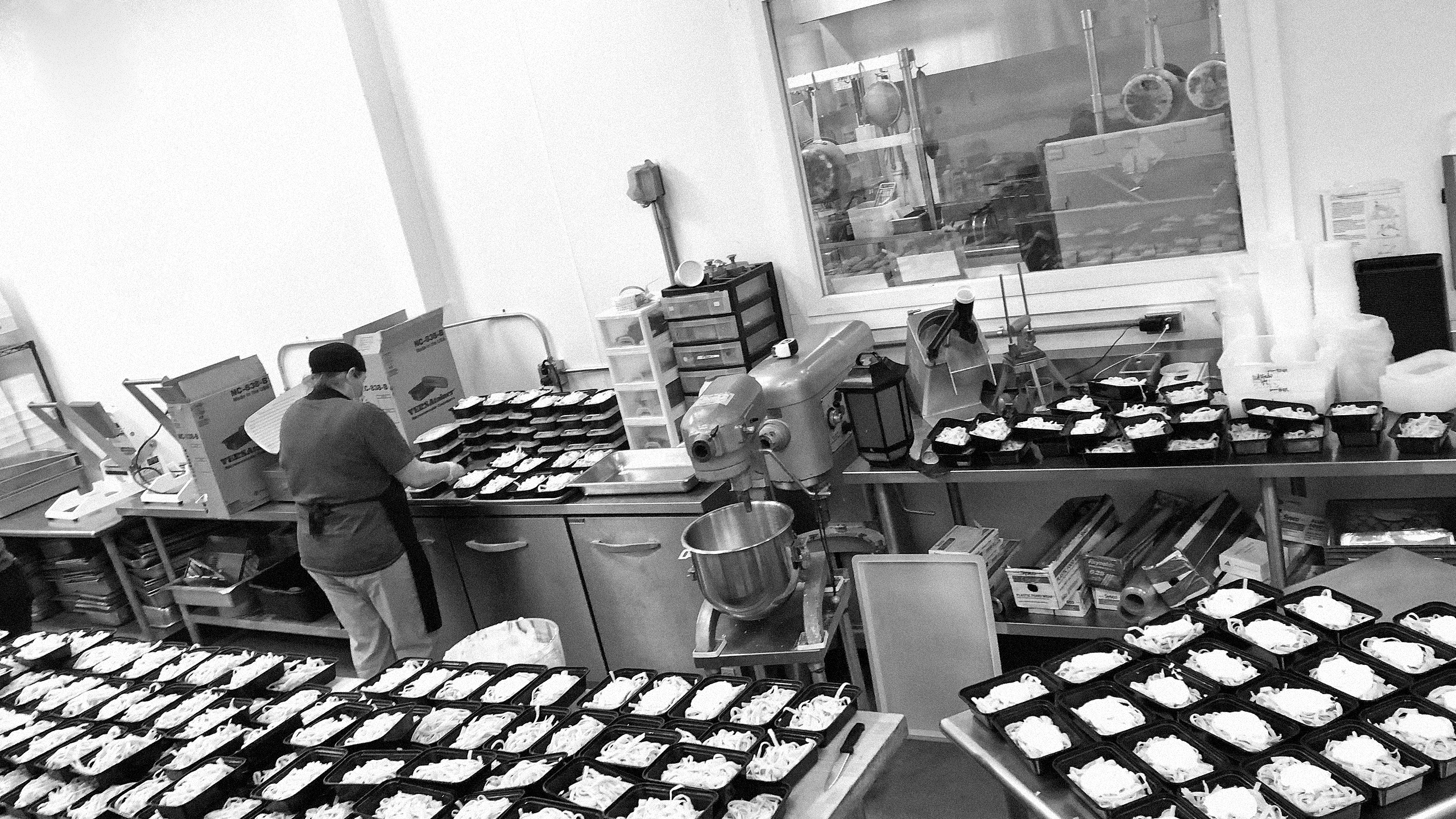 When Vermont restaurants abruptly shut down in March due to the COVID-19 pandemic, they faced catastrophic losses. Additionally, many food service workers were left wondering—literally, in some cases—where their next meal would be coming from.

Benjy Adler ’03, cofounder of the Vermont creperie, the Skinny Pancake, saw that the impacts of the shutdown were closely tied to the business’s mission: to embrace the local food movement, encourage sustainability, and support the community. The restaurant chain, which Adler had started with his brother as a food truck in 2003, had five locations in Burlington, Montpelier, and Quechee (and has since added a sixth, in Stowe). Suddenly, he found himself laying off some 200 employees.

“Some people live paycheck to paycheck, and I know exactly how unemployment pays out,” Adler said. “And it was like, this is just not going to work. Within weeks there are going to be people who are seriously food insecure.”

The restaurant had a backlog of perishable foods and nowhere to sell them, as well as a commissary in Winooski capable of large-scale production. Adler said, “I wasn’t going to sit on the sidelines and let this team and all of these resources—fiscal and human resources—just sit idle while people go hungry. And so we just started producing food.” They called the effort ShiftMeals, which provided free meals for their own employees and others who had lost income due to the pandemic.

In a bit of lucky timing, the Skinny Pancake had already been working with a group of social impact investors for about a year with an eye to opening more locations in Vermont and New York, which would help support the local farm economy. While the pandemic put a temporary halt to those plans, Adler saw an opportunity. He asked the investors, “Look, we don’t know what comes next, but could you just write us a grant to—just feed people?”

The investors gave $30,000, and then distributors made additional donations. “As happens in these kinds of things, the community comes in and starts supporting, and so we did see a lot of donations from corporations and businesses in the area, as well as individuals. That gave us the runway to start producing food.”

Within days, they were distributing free meals in communities where the Skinny Pancake then had storefronts, as well as in Stowe, where it would soon be opening a new outlet. “We felt like we should step up and support our communities,” Adler said. “We had the teams and the infrastructure to do it.”

Then, just a couple of weeks into this effort, the Vermont Food Bank approached Adler and asked if the Skinny Pancake could start producing meals for them as well. Adler said, “That led to us producing about 6,000 meals a week in April and May,” about 1,500 that they distributed through Skinny Pancake locations, and about 4,500 that they palletized, boxed, and sent to the food bank for its own distribution.

Adler soon realized he couldn’t both manage ShiftMeals and focus on steering the Skinny Pancake through the crisis. He needed help, so he turned to an old friend from Middlebury, Jean Hamilton ’04. Adler had occasionally hired Hamilton to do consulting work for the Skinny Pancake in the past, but now he needed her full time. “So Jean took the helm,” he said. She brought with her an MBA from SDA Bocconi in Milan, Italy, and 15 years of experience in food systems management, including more than 10 at NOFA (the Northeast Organic Farming Association).

Together Hamilton and Adler began to brainstorm other ways to expand ShiftMeals to leverage Vermont’s food systems. “We have this incredible local food economy that leads the country, and resilience has always been claimed to be a cornerstone of that. And if ever resilience was needed, this was where.” In April, after a few iterations and in concert with several community partners, they landed on the concept of ShiftMeals GrowTeams.

While the main focus of ShiftMeals was using restaurants to provide meals, GrowTeams would allow people who had been laid off to volunteer to work on vegetable farms and gain their own food security. Adler calls it “collective community gardening.” Using about 10 percent of their PPE money and a lot of their own resources, the Skinny Pancake team hired 40 people to jump-start six farms until a volunteer network could be established and take over the work.

“Instead of a community garden made of individual plots,” he said, “it’s one large garden that everyone contributes to and benefits from. . . . Everyone works on one big garden, which, it turns out, leads to more stability, better education opportunities, better connections with your neighbors.” The positives, Adler said, “kind of blew my mind.”

The success of ShiftMeals didn’t go unnoticed. In June, Matt Birong, a Vermont state representative and the owner of 3 Squares Café in Vergennes, called Adler to say that he was part of a group putting forward a bill for a $5 million program to create a ShiftMeals-style program statewide. The program, Everyone Eats, would pay Vermont restaurants to produce meals to be distributed free to the food insecure. That money would come from the Coronavirus Relief Fund, which was money allocated to the state through the federal CARES Act.

Hamilton, with her experience building out ShiftMeals, stepped up to help—“Jean was just a total hero,” said Adler—writing content, speaking on the statehouse floor, and working with committees. Her efforts helped; the legislation passed.

But the state needed someone with Hamilton’s knowledge—ideally Hamilton herself—to implement Everyone Eats. With Adler’s reluctant blessing, “they hired Jean away from us,” he said. Brit Sperber, a UVM grad and general manager of the Skinny Pancake, took on the ShiftMeals program, which Everyone Eats engaged to do a large chunk of the logistics and communication for Chittenden, Washington, Lamoille, Franklin, and Grand Isle Counties. In addition, ShiftMeals was still generating over 2,500 meals a week for Everyone Eats.

The model of using restaurants around the state as distribution points just makes sense, Adler said. “Restaurants are part of food security, and these are all little industrial producers, decentralized throughout the state. And when we have food security problems in the future, we can tap that. And in particular, we can tap it because up here in Vermont, we have just a really good social network.”

Adler acknowledged that although both ShiftMeals and the GrowTeams were “crisis response concepts,” designed quickly to address immediate needs, he hopes they will perpetuate in some form. ShiftMeals has shown that food service businesses “are all little industrial pods distributed through every city, state. And in times of crisis, we can take a page out of this playbook and use these community hubs for food security.” And the GrowTeams proved more productive than standard community gardens. “There’s just overall more output,” Adler said. “There’s an economy of scale there. So not only did we produce the CSAs, but we produced thousands of pounds of food we were able to donate to food shelters.”

Adler acknowledged that although both ShiftMeals and the GrowTeams were “crisis response concepts,” designed quickly to address immediate needs, he hopes they will perpetuate in some form.

If there can be said to be a silver lining in the pandemic, Adler and Hamilton say it is being forced to confront the issue of food insecurity head on. “From my perspective,” Hamilton said, “this year has been a year of truth revealed, where not only were we sort of forced to let go of the notion that we know what’s going to happen or we are in control, but we were forced to reckon with how our society is set up and how the structures of our society are serving or failing various members of our community. And I think those are truths that have been intentionally hidden from many of us but also that many of us have been able to kind of naively ignore. And it’s just not really an option to ignore them anymore.”

“We, as a company, self-identify as being on a mission to have a positive social impact,” Adler said of the Skinny Pancake. “During good times, it feels like we can be at risk of just being self-serving about that, or not going as deep as we could otherwise. And certainly, the multiple levels of disruption that have happened in the last six months have been kind of eye-opening. If we are about social impact, we’ve got to step it up even further. So we’re doing it with all the force and might as we can right now. . . . It definitely kicked our ass into the higher gear.”

For Hamilton, whose normal work emphasizes long-term planning, it’s been a wild but rewarding year. “It’s been actually a really great exercise to be sitting in the present moment and thinking about how we address the real raw needs of people in communities now,” she said. “I think that’s the meta-lesson I would like to take forward with me into the future, and that I think a lot of our networks and our partnerships have seen this year: that because of the work we’ve done, and the trust and the relationships that we’ve built, we’ve been able to work together and respond in real time, in the present moment, and make pretty dramatically impactful decisions.”

While no one knows how COVID-19 will continue to affect food insecurity in the coming months, Adler and Hamilton are confident that Vermont will be able to react effectively.

“Whatever happens in the uncertainty of next year,” Hamilton said, “we know that our community is with us and that we are linked arm-in-arm and ready to take that battle on together.”