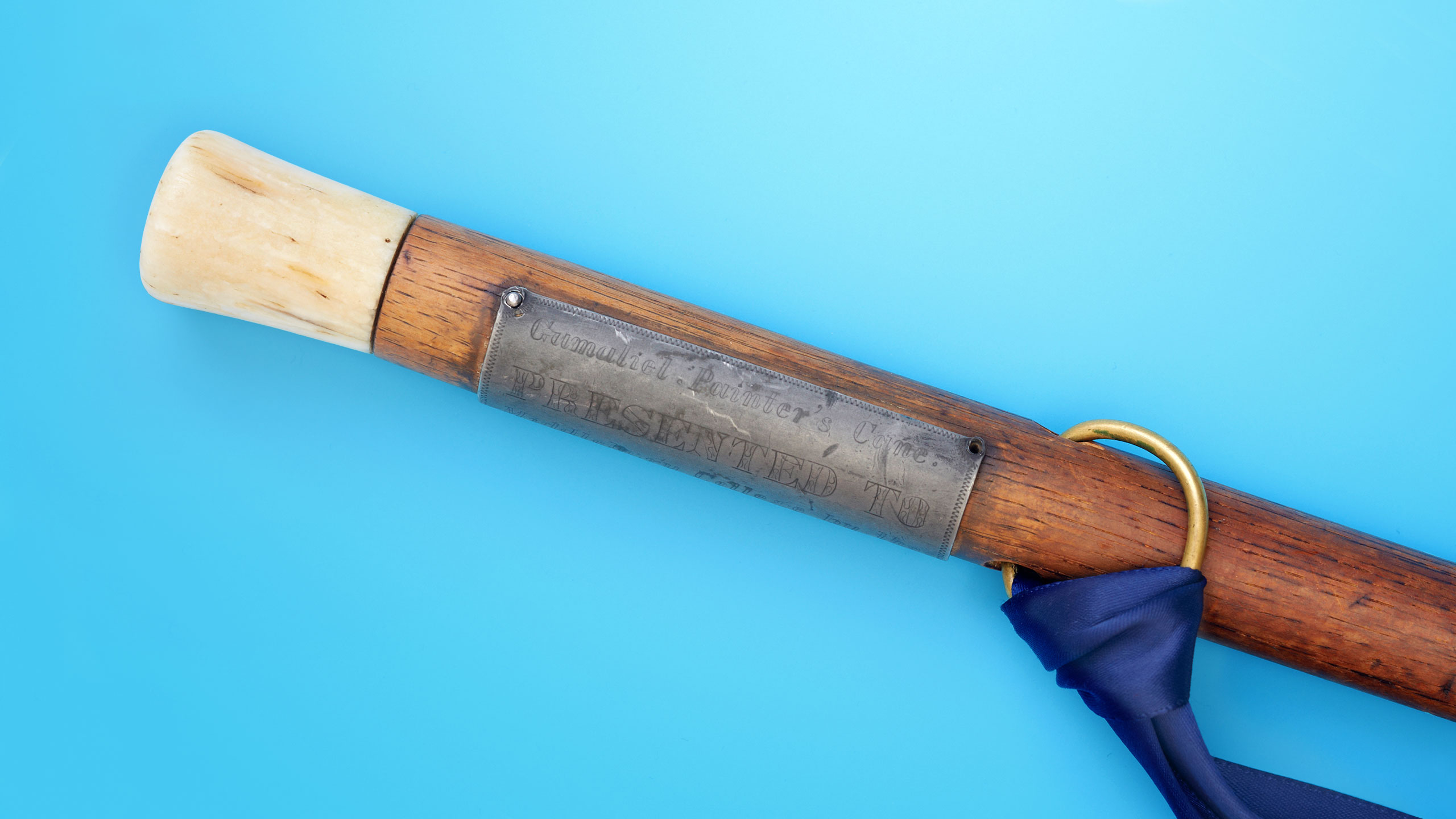 In the spring of 1909, Rhoda Mabel White, a doctoral fellow in sociology at the University of Wisconsin, wrote to President John Thomas, inquiring about a new position at Middlebury: Dean for the Women’s College. In her correspondence, White presented her qualifications and stated she would want to serve as a “builder of women . . . [not as] a ‘house mother’ or ‘social advisor.’” She was hired that summer.

Fifty years separate Martin Freeman, (Class of 1849) and Mary Annette Anderson (Class of 1899) but they will be forever linked. Anderson, her class’s valedictorian, was the first woman of color to graduate from Middlebury; Freeman was the first African American president of a U.S. college. These pins—created as part of Special Collections’ “Faces of Middlebury” series—helped commemorate the opening of the intercultural Anderson Freeman Resource Center in 2015.

This piece of parchment—23 x 28 inches—was drafted and signed a few hours after the Vermont legislature voted to approve the creation of a college in the frontier town of Middlebury.

It was late one night in 1888 when the Class of 1890 used the cover of darkness to tear down and burn a white picket fence—“a monstrosity,” one wrote of the structure—that bounded part of the campus. All that remained were the iron pins that served as hinges. The class considered the act of “beautification” its “greatest achievement.”

The first campus plan of the 20th century was an elaborate—and unrealized—Beaux Arts design with grand gardens and separate gymnasiums and libraries for men and women.

Middlebury’s founder bequeathed his walking stick—four feet long, made of oak with an ivory handle and brass tip—to the College, along with $13,000. The money saved Middlebury from financial ruin, and the cane became an enduring symbol of the institution.

Since the early 20th century, the president has carried the walking stick at official College events; replicas have been presented to graduates since 1995.

The oldest collegiate winter carnival in the United States, Middlebury’s annual event has featured a wealth of colorful posters, each with its own distinctive style of the day and age.

It has been reported that 25,000 fans watched in shock as Middlebury tied “mighty Harvard,” 6-6, in Cambridge. Harvard was a national power, and the “upset” made the front page of the New York Times sports section.

ROTC was compulsory at Middlebury from 1952 to 1966; from that point it was voluntary until the campus program was phased out in 1976. Since then, several dozen undergraduates have pursued ROTC classes and training at the University of Vermont.

During his first semester at Middlebury, a young man named Byron Sunderland wrote an earnest letter to a friend, in which he described in great detail his daily schedule and his surroundings. Accompanying the prose was a hand-drawn map of the town and campus, complete with a key notating churches and bridges and dormitories.

Honestly, there’s nothing all that special about this ashtray—other than its kitschiness and its ability to speak for an era when a lot of people smoked—and believed it appropriate to flick ashes onto a portrait of one of the College’s iconic buildings.

The Parker Merrill Speaking Competition has enjoyed a rebirth, returning to campus after a 50-year hiatus. One of Middlebury’s oldest traditions (it dates to 1807), the event was once so integral to student life, it was part of each year’s Commencement.

WRMC first went on the air in 1949; the Boss’s Nebraska was pressed in ’82. And by the looks of it, the record has received quite a bit of airplay since then.

What did a student’s daily academic schedule look like in 1874? We have this spread from the Kaleidoscope to tell us. A senior could expect to study politics, economics, English, intellectual philosophy, geology, moral science, law, and history of civilization.

Once a ubiquitous presence in our libraries, the card catalog has now gone the way of the rotary telephone and the typewriter. This particular catalog served as a register for the books in the Starr Library’s Abernethy Collection.

This academic robe and hood once belonged to Ernest Calvin Bryant, Class of 1891. Bryant taught physics at Middlebury from 1895 to 1937; upon his retirement, he gifted his regalia to colleague Ben Wissler. When Wissler died in 1983 his widow Prindle passed it along to Frank Winkler. This spring, Winkler presented the robe and hood to the department’s newest tenured member: Anne Goodsell. She becomes the first woman faculty member to wear the Bryant attire, and only the fourth wearer in its 122-year history.

Middlebury’s first professor was a scientist named Frederick Hall, appointed in 1806 as a professor of natural philosophy. Immediately following his hiring, he was dispatched to Europe, where he began procuring scientific apparatus for the College. One of his finds was this set of handblown glass “gravity beads.” Painstakingly crafted in Scotland, this set is quite rare; there are only four or five known to exist today.

Each fall, while the Middlebury and Williams football squads compete on the gridiron, students from the respective schools square off to tackle a two-hour set of math problems. To the winning side goes the Green Chicken, an avocado colored casserole dish, once a wedding gift to a Middlebury math professor. Alas, Williams—winner of the 39th annual contest in 2016—is currently housing the bird.

Though Middlebury’s eighth president, Ezra Brainerd, originally focused his academic pursuits on rhetoric, he became a distinguished scholar in the natural sciences and was considered an expert on violets in North America. These specimens were collected in Addison County while Brainerd was a faculty member in the years before he assumed the presidency.

It is believed that this apparatus was acquired by Ezra Brainerd in the early 1880s, shortly after he began teaching physics at Middlebury. With its mahogany base, iron driving pulley, and steel spindle supported in a brass frame, the whirling table was used to determine centrifugal force.

Blue knit sweaters with a large white “M” passed for athletic swag in the 1930s. This particular item was worn by Charles Thrasher ’32, captain of the football team.

In the 19th century, horns were as prevalent on campus as cell phones are today. This particular horn has the surnames of all 23 members of the Class of 1890 etched into its side. There are also notations for special “hornings”: September 1889 “for the amusement of the freshmen”; October 1887 “for the amusement of the citizens of Cornwall”; and November 1888 at a parade honoring U.S. President Benjamin Harrison.

Ralph Waldo Emerson delivered the Commencement address in 1845 upon invitation from the College’s literary and debating society. Subsequently, the group wrote to Emerson requesting permission to publish his talk, a request that the transcendentalist declined. News of the rejection is recorded in the society’s minutes of their October meeting.

Woe to the first-year who didn’t bring their dance card to a frosh frolic.

From the 1920s until the mid-1940s, graduates would celebrate Commencement by donning caps and gowns—and lighting one of these

When the College broke ground on what would become its first permanent structure—Painter Hall, then known as the “Stone College”—the man overseeing the construction kept track of every expenditure in exhaustive detail. Gamaliel Painter’s ledger was thought to be lost to history—until facilities staff discovered it during renovations of the Service Building in 2013.

Nearly a century after the opening of the Language Schools, its students began sporting pins signifying their language of study—a handy way for passersby

A handful of cyanotype prints serve as documentation of the ceremonial groundbreaking for Mead Chapel.

President John Thomas kept an embossing press like this one—if not, in fact, this very one—on his desk, which he would use to imprint the College seal on official correspondence. The loose die that accompanies the press in this photograph predates the trustee’s 1933 decision to add the date “1800” along the bottom of the outside ring of the seal.

A culinary tour through time: from the colorful Proctor bowls and plates (just as often seen outside the dining hall as in!) to an early 20th-century Thanksgiving (roast venison!) to a Momofukuinspired Dolci (agedashi tofu!) to bakers’ recipes from the sixties (those elves!).

Middlebury’s first Commencement exercise was an all-day affair, featuring music, Greek and Latin oration, speeches, prayer, and debate. That August day, one student “was admitted to the degree of bachelor of arts.”

For more than a century, Greek life played a central role in the social life of the College. One’s letters could be found on pillowcases; pins were collected among generations of family members; and, in the end, manila folders overflowed with memoranda documenting the demise of a once-proud tradition.

During the first half of the 20th century, Robert Frost was a fixture at Bread Loaf. He began teaching at the School of English in 1921, was instrumental in the formation of the Writers’ Conference a few years later, and would return each summer until his death in 1963. He wrote many of his poems while sitting in this very chair in his Ripton cottage.

Jeremiah Atwater was Middlebury’s first president, serving from 1800-1809. Educated at Yale, Atwater ably presided over a cash-strapped college, building a library and hiring the school’s first professor (see p. 39). However, when that professor received a raise that increased his salary to twice that of the president, Atwater quit in a snit. He also had nice cufflinks.

Patrick Villiers Farrow’s bronze sculpture stands guard outside Munroe Hall. It’s rumored that five Middlebury students inadvertently invented the Frisbee in 1939 when they began to toss around a discarded pie tin from the Frisbie Pie Company while changing a flat tire. As for the sculpture, it’s probably as well known for being anatomically correct as it is for its depiction of athletic pursuits.

His is the last name listed on this page of seniors in the 1822-1823 student catalog: Alexander Twilight; Corinth, Vermont; Room 37 w.c. In the spring, he would become the first African American to earn a degree from an American college; whether people knew that at the time is up for debate. It’s believed that the light-skinned Twilight was assumed to be white while a young man, and it wasn’t until later in his life that he was identified as being African American..

Joseph Battell’s Ellen or Whisperings of an Old Pine—in which a pine tree engages in Socratic dialogue with a woman named Ellen—is so strange and so bad that it has factored into an enduring tradition at the Writers’ Conference. For years, director Michael Collier has opened the conference by reading passages from the book. “It sets the literary bar so low that it puts everyone at ease.”

The precursor to the global environmental organization 350.org, Middlebury’s Sunday Night Group galvanized the campus during this century’s first decade—without them, there probably wouldn’t be a biomass plant and the College wouldn’t be carbon neutral.

At times in Middlebury’s history, students have found cause to stand in opposition—to events occurring around the country and the world or on our own campus. In the spring of 1970, a student proposal to suspend “normal activities” at the College in protest of the expansion of the Vietnam War and loss of life at Kent State was approved by the College Council; it was the prelude to a weeklong strike on campus. And this spring saw students and faculty wearing blue armbands inked with the letters RJ (for restorative justice) in protest of the College’s disciplinary process following the Charles Murray incident.