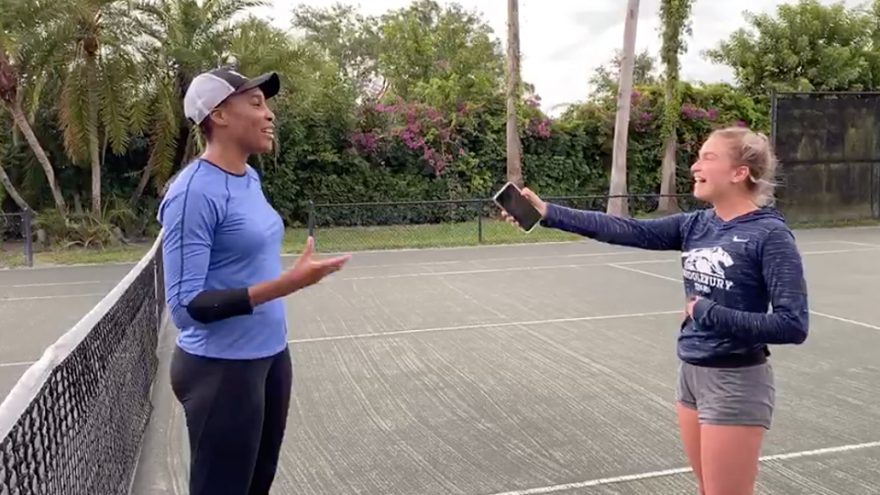 A few weeks ago, a video began making the rounds of social media: a young woman wearing a blue hoodie with “Middlebury Tennis” emblazoned on the front appeared to be standing on a tennis court with . . . Venus Williams?

Hit “play” on the video, and you learn that the young woman is, indeed, a member of the Panther women’s tennis team; her name is Amanda Frank, and she is a first-year from south Florida. And yep, that is, indeed, Venus Williams.

In the two-minute video, Frank interviews Williams, introducing the tennis superstar as a potential Panther recruit. It’s fun. It’s funny. And it left us wondering—how in the hell did this come about? So we reached out to Amanda Frank, and this is what she had to say.

Before we start talking about the video, I’m going to ask the most obvious question: How did you come to be standing face-to-face with Venus Williams on a tennis court?!

My old coach from high school used to be Venus’s hitting partner and is friends with her current coach, who lives in Miami. About a month and a half ago, Venus’s coach was looking for a private court where she might be able to play in case the courts in south Florida started shutting down because of COVID-19. Her coach connected with my dad and asked if he and Venus could come and play at our court. Now she comes nearly every day at 4:30 to play! It’s been incredible getting to watch her and getting to know her—from a distance, of course!

Though it’s one thing to see Venus every day at your house and something else entirely to propose the idea of a video like this one.

Ha. Yeah, of course. At first, my dad and I would simply joke with each other about the idea of Venus Williams playing D-III tennis for Middlebury; we’d laugh at the thought of asking her what got her interested in Midd and specifically what about Middlebury did it for her.

After a few weeks, I got to know her little by little, and I discovered she has a terrific sense of humor. I got the feeling that we could have some fun with the idea of an interview. And she agreed! Now she asks me every day if I have heard back from Middlebury Admissions!

Venus’s sense of humor is evident throughout the whole piece, but her subtle comment about having a potential doubles partner is gold.

I know. Right when she made the subtle Serena reference, I think my heart stopped. They have both been idols of mine since I was young. Serena and her family—her husband and daughter specifically—sometimes also drop by to say hi!

‪‭Whose idea was it to edit in the clips of Venus—and then Venus and Serena? Having those clips with the announcers added another great dimension to the piece.‬‬‬‬‬‬‬‬‬‬

Thank you, I appreciate that! After we got the interview on video and I watched it back, I knew it would be perfect if I could add some context about who she was and how much she has accomplished.

What did Venus think after she watched it?

She really liked it. She thought it was funny, and I think her favorite part was the bit about her and Serena playing doubles for Midd.

Well, even if the Williams sisters never suit up for Midd, I think you’ve given Panther fans plenty of reasons to smile.

Thank you so much. This was a lot of fun to do, and it brings me so much joy to be able to bring a smile to people’s faces during this incredibly chaotic and stressful time.