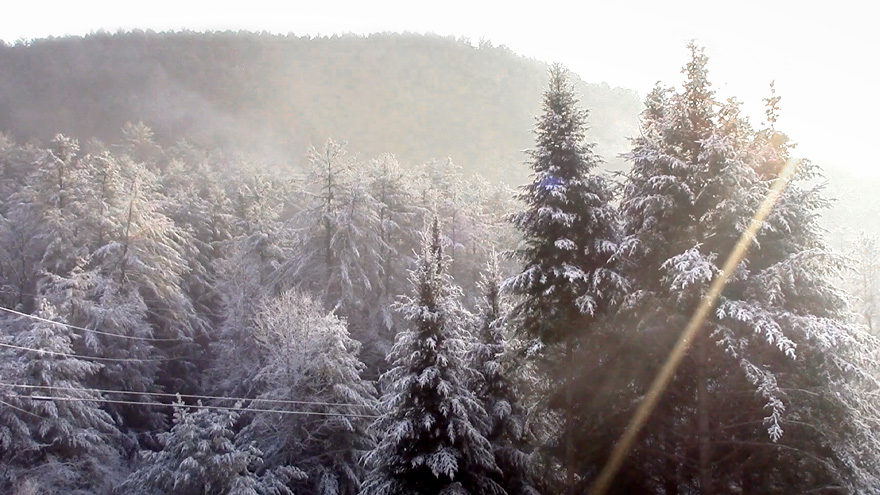 Behind every product is a process.

The product, in this instance, is a group of compelling short documentaries—made by Vermont middle and high school students—that premiered online in late June under the title Five Youth Films for Change. (These wildly impressive films can be found on this YouTube channel.)

The process behind these films took place in a course titled “What’s the Story?”  Each year, in this free, for-credit program, students from across the state of Vermont work with adult mentors in small cohorts—or “social action teams”—to research, write, and produce films on topics they’ve developed over the course of the fall semester. This year’s documentaries address such issues as Vermont’s changing winter climate (the above image comes from this film) and the value of studying and preserving Abenaki culture.

“What’s the Story” was launched in 2013 by a team of teachers who had studied at the Bread Loaf School of English and were looking to provide an engaging out-of-classroom learning experience that met Vermont curriculum standards. It is sponsored by the Bread Loaf Teacher Network and led by educators Tim O’Leary, MA English ’07,  and Bill Rich, MA English ’99, who also work with schools and teachers who are interested in bringing the concept of storytelling through media into their classrooms.

O’Leary and Rich’s passion for “What’s the Story?”—and their delight in what students accomplish when they’re “treated like the leaders they are capable of becoming”—comes through in their conversation. A Zoom call with the two—even one that takes place in the early morning hours, just after sunrise so that O’Leary’s spouse can watch their young children before she leaves for work—is a riveting affair.

Rich and O’Leary delight in talking about the program’s model, which involves students from different schools working remotely most of the time. They believe it may provide insights for classroom teachers who, due to the pandemic, are facing the possibility of at least some degree of distance learning for the upcoming school year.

“Perhaps people are more ripe for adopting this program right now, since they’ve been pushed into the deep end of the pool of doing remote learning,” Rich says. “What we’re really interested in is teaching people how to do this blended learning thing well. We know quite a bit about how to shift the curriculum so it really works within this realm.”

Between the effects of the pandemic and the rise of social movements such as Black Lives Matter, Rich says, “there’s been a confluence of  social awakening, and many more people are trying to figure out things like ‘How do we make current events not just be current events but a way for us to study history and make sense of it?’”

In a normal year, students have opportunities not only to share their films online but also to present their topics in person; that part isn’t possible this year. Still, besides some minor technology issues—not all students, for instance, had sufficient broadband access in their corners of the state to upload video files to the cloud—O’Leary said changes due to the pandemic did not greatly affect the students’ schedules; luckily, most filming had already wrapped up by March. If anything, he says, the program offered students some continuity at a time when they were losing the structure of in-person classes.

The films, O’Leary says, are important; they showcase the students’ learning and give them something to be proud of. They also offer a way for students to promote social issues they feel strongly about.

But he emphasizes that the process is just as valuable; through the challenges of making the films, he says, students learn “to really understand their own abilities and increased strategies around what we call transferable skills—communication, collaboration, self-direction.”

And even after the films are finished, the learning continues. Rich says, “Students come away amazed at how many sides there are to the issues they investigate.” In fact, he says, it’s not uncommon for some to come back to the program for a second year to “really dig into” the previous year’s topic.

Perhaps most important, students discover that their voices matter. By making these films and presenting what they’ve learned to the public, O’Leary says, “students come to understand that they can speak to things they want to see changed in the world, small or big, and that whatever they’re working on now is hopefully just the beginning.”