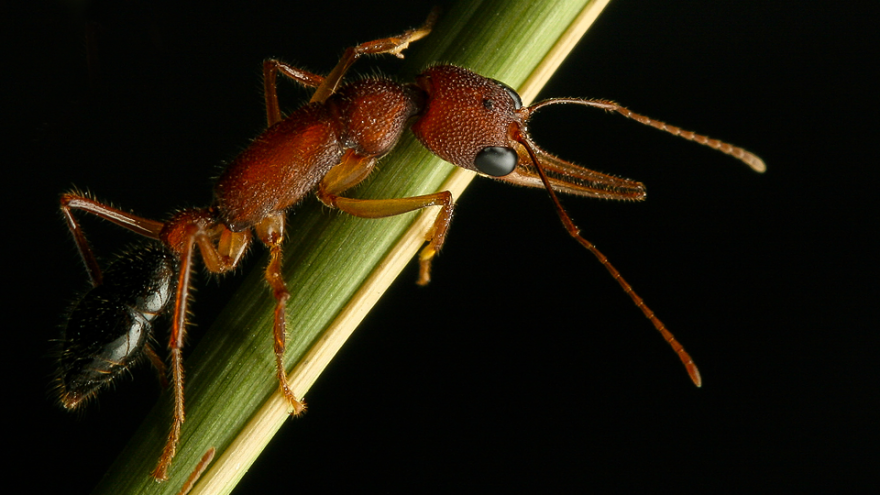 As I lean down to peer into one of four clear plastic boxes, each containing 15 or so Indian jumping ants, one of the ants approaches the near side of the box and stares directly at me with its large eyes. It rears up and wiggles its abdomen from side to side.

It is late September, and I am with biology professor Greg Pask in his lab in Bi Hall, inside the “ant chamber,” a freestanding, environmentally controlled unit that looks a bit like a high-tech walk-in cooler; it’s carefully sealed at every seam to keep the ants in, should they ever escape from their boxes. Pask explains that these ants have big eyes to aid in hunting, and they do recognize when people come near them. He says this particular ant may look like a dog wagging its tail, but the behavior actually indicates mild aggression. I admit I’m a little intimidated.

I must not be a serious threat, however, as the ant soon loses interest in me and goes back to the group. A lot is going on in that container. Some ants are cleaning, dragging detritus to their self-designated trash corner. Others are gathered around the provided food source—a cricket they have paralyzed with a sting and whose blood will feed their larvae. Others move eggs around, turning them end over end like Crossfit athletes flipping tires. And two, sometimes three, are actively antagonizing each other in an on-again, off-again wrestling, shoving, antennae-tangling match. Pask explains that the wrestling ants are females vying to become the reproductive, or pseudoqueen, of this currently queenless group.

The ants, 60 or 70 in total, arrived a few weeks earlier. Pask divided the ants into four nest boxes and, with some of his students, is monitoring their behavior, including the way a new pseudoqueen will eventually form for each colony. Pask says, “We’re looking into the evolution of sociology and how ants have become so successful in living together, being very altruistic in giving up their own ability to reproduce to help out the offspring, and all the chemical communication that takes place in that process.”

Pask, an insect neurobiologist, has chosen the Indian jumping ant (Harpegnathos saltator) for its evolutionary position as a eusocial—or truly social—insect. These ants are less evolved than leaf-cutter ants, for instance, which have a complex system of four or five castes, as well as a queen. Indian jumping ants, with just one caste—workers—and the reproductive, are easier to study.

“This is kind of stepping back; these ants are primitively eusocial,” Pask says. “They have this plasticity between the colony where workers can become pseudoqueens of the colony to essentially make the colonies immortal.”

Not all insects are eusocial. “Flies, all sort of insects, just mate,” Pask says. “That’s a social interaction. What’s truly social is having this reproductive division of labor, having overlapping brood care, and multiple generations in the colony.”

In most ant species, when the queen dies, the rest of the colony dies too. But with Indian jumping ants, Pask says, “when the pseudoqueen dies, the workers have this big battle royal tournament and will do antennal dueling, biting, policing—where they’ll carry around one of their sisters in their mandibles for up to a day and just take them out of the tournament. Whoever wins starts to lay eggs and becomes the new pseudoqueen of the colony.”

He continues, “We’re interested in understanding what the chemical messages are that dictate that, and how they are detected by the ants.” The ants all carry the same genome, but these are expressed differently depending on whether an ant remains a worker, which may live six months to a year, or becomes a reproductive, which will live two to three years.

“Our lab primarily studies insects’ sense of smell,” Pask says, “and how they can smell things, like ‘Hey, this member of my colony is reproducing and laying eggs, so I won’t do that.’ And they’ll actually reduce their own ovarian activity to do so.”

To further this research, Pask and his undergraduate students enlist the help of another insect: the fruit fly. “We take genes out of ants, and we put them into fruit flies; we can do all that through a lot of genetic tools. We can stick an electrode into a small little hair on the antennae of a fruit fly and puff different odors and say, ‘Oh, this fly couldn’t respond to this ant pheromone normally. We added this one ant receptor gene in, and now, all of a sudden, we got a response.’ We’ve now decoded the function of that receptor.”

The lab uses a machine dubbed the “PiSpy” to facilitate observation of the ants. Pask says it’s “a DIY setup we made using a Raspberry Pi computer to monitor our ant behaviors around the clock.” He started working on the PiSpy with his lab group at Bucknell, where he taught before coming to Middlebury in 2020. At Middlebury, Pask and others have further refined the PiSpy; he gives much of the credit to Ben Morris ’22, a molecular biology and biochemistry major and computer science minor, who, he says, “helped a lot in developing the code for the project.”

The lab is sharing open-source plans for the device, which can be built for around $120. The PiSpy can film under daytime or nighttime lighting conditions and can be set to record at various time-lapse frequencies. Filming can be scheduled or triggered by pressure plates or motion sensors. Referring to his own lab’s use of the PiSpy for ant research, Pask says, “In the future, we might be putting these videos online as a community science project where volunteers can analyze certain ant behaviors and learn at the same time.”

It’s been over a month since I first met the ants, so I email Pask for an update. “The ants are doing well,” he tells me, “and the big tournaments are all over. A new reproductive has been established in each box, and the eggs are increasing in each colony. We just had our first new adult appear, and there are more eggs, larvae, and pupae than before. The lifecycle takes some time!”

He also has some other insect news to share: “We are just beginning a National Science Foundation–funded project to look at chemical communication in fireflies, specifically ones that do not light up as adults.” This growing phenomenon is likely caused by light pollution, which makes it harder for a firefly signal to be seen by potential mates. The five-year, nearly $1 million project will be conducted in collaboration with researchers at Bucknell and UC Riverside.

The “Middlebury ants” have developed a bit of a following on Twitter, with new content regularly posted using the hashtag #MiddAnts. A recent tweet featured a mesmerizing video of a huntress foraging for crickets.