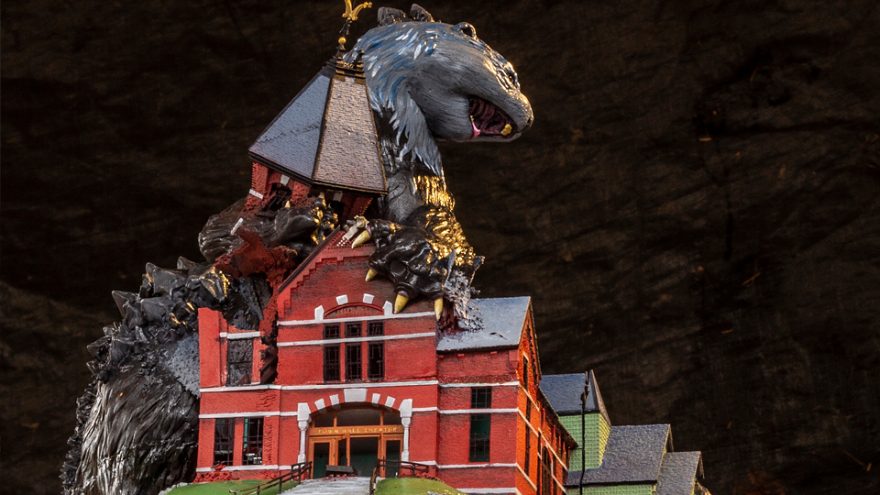 Given the way 2020 has gone, when I opened the newspaper the other day and was confronted with an image of mutant otters attacking Middlebury’s Town Hall Theater, I barely raised an eyebrow.

My next thought: We need more of that. Not wanton civic destruction or mutant wildlife, mind you, but humor and creativity to bring a bit of light and levity to these dark and heavy days. With his 3D-printed sculpture Mutant Otters Destroy Town Hall Theater, Daniel Houghton ’04 has done just that.

Houghton directs the College’s Animation Studio, and he told writer Margaret Grayson, who wrote a great piece for the terrific Vermont alt-weekly Seven Days, about his most recent project: “I’m always imploring the students to speak about their art,” he said. “Doing the thing that I’ve asked them to do—it felt like it was time.”

Houghton also documented his efforts through a series of step-by-step YouTube videos that chronicle the progression from a germ of an idea to a finished work of pop art.

We’re including the first video here; if you’re like me, you’ll allow YouTube to take you to the end and lead you to the other eight in succession. I also encourage you to read Grayson’s Seven Days story.

And if you’re in the area, find time to take a holiday stroll down Main Street and check out the art itself. It will be on display in the window of the National Bank of Middlebury through January 4.