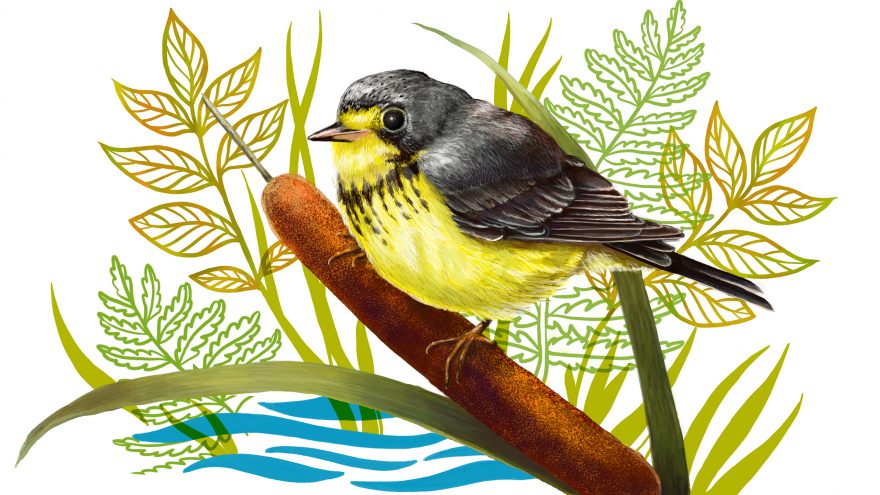 Politicians of all stripes make calls to “drain the swamp” as a euphemism for ridding government of special interests, as if swamps contain all that is dark, evil, and selfish, instead of being the life-giving places that they are. Because words matter and so do the actions they inspire, I ponder how we might restore swamps to their rightful place on the landscape. How might we celebrate the swamp and embrace a perspective that considers broad timescales, recognizes interconnectedness, and appreciates the diversity and complexity that enrich our lives?

Swamps have a lot to teach us about broader perspectives. Before heading into Cornwall Swamp in Vermont’s Champlain Valley, my students and I don hip waders. Solid ground gives way to uneven terrain, and we encounter with each step the complexity and variation in vegetation, soils, and water depth. One moment, I am standing on a dry mossy hummock where northern white cedar, red maple, and black ash trees are rooted with deciduous holly shrubs and verdant cinnamon fern. A step later, I am shin-deep in water and sink into deep, black muck.

As we squeeze the muck between our fingers, we shift our perspective of time. The deep, dark, waterlogged soil that extends meters deeper than we can probe has formed over millennia from the remains of plants. We are transported back over 10,000 years to when glacial Lake Vermont receded, and organic deposits started accumulating in the basin.

Students get sucked in; they let down their guards. They laugh and help pull each other out of the muck and appreciate each other in new ways. We all experience the quiet, the beauty, and the life-giving nature of the swamp, home to Canada warblers and moose, and a source of clean water downstream.

We appreciate the legacy and hard work that have maintained thousands of acres of wetlands that buffer Otter Creek. The Nature Conservancy cites the Otter Creek Swamps as the largest and most biologically diverse swamp complex in New England. The state of Vermont had the foresight to begin formally conserving Cornwall Swamp in 1965, and soon after it was designated a National Natural Landmark. This was the era when bipartisan efforts established the Environmental Protection Agency and expanded the Federal Water Pollution Control Act to become the Clean Water Act. Today, a consortium of farmers, local governments, landowners, and nonprofits continue the work to restore and conserve the Otter Creek Swamps.

The students and I experience the importance of the swamps to those downstream by reflecting on a recent and dramatic example. When Tropical Storm Irene hit Vermont in August 2011, the Otter Creek Swamps absorbed floodwaters and released them slowly over a period of weeks, reducing the rate of water rushing through the town of Middlebury. As much as $1.8 million was saved in avoided property damage in Middlebury alone during that one storm, according to a study conducted by the Gund Institute for Ecological Economics. Typically, the peak flow rate of floodwater increases downstream as the size of the watershed increases; however, during the intense storm, the rate of flow of Otter Creek was lower in Middlebury than it was upstream in Rutland, a city not buffered by swamps.

Many students remark that they feel like they are in another world in the swamp. Perhaps visiting the swamp helps them understand interconnectedness, the complexity of space and time and context in a new way. One can understand how events in the past and actions in the future make a difference in our lives.

Instead of suggesting we degrade swamps, we can think over broader timescales and recognize how actions today shape the future and help us weather storms to come.

So go borrow a pair of hip waders and some binoculars and head into the muck with a neighbor—and appreciate how this diversity enriches our lives.