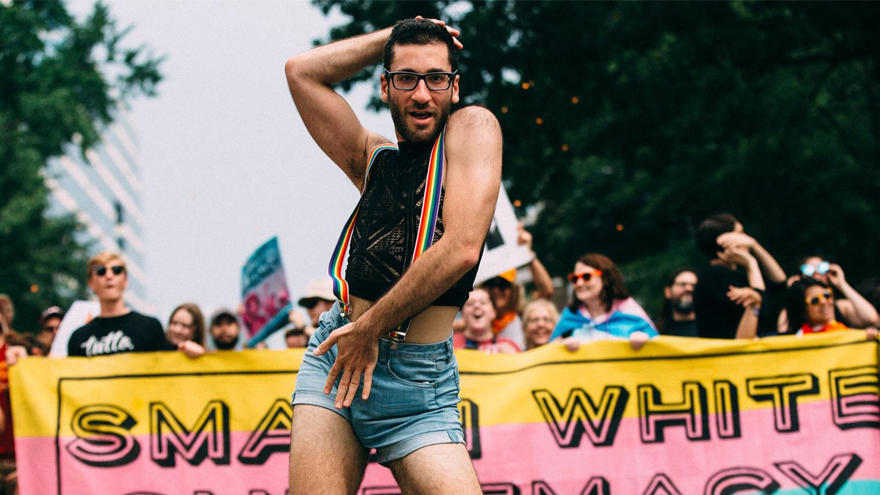 “The way that I see our role in activism is less about the people who we seek to change and more about the communities that we seek to center.”
—Firas Nasr ’15

Introduction:               When I think about justice, I think about a world in which everyone can live free from violence. And that to me is something that we constantly work towards as activists every day, creating a world where we are seen, we are heard, and we do not face violence as a result of being who we are.

LP:                               You are listening to Midd Moment, a podcast of ideas from Middlebury’s leaders, independent thinkers who create community. I’m Laurie Patton, president of Middlebury and professor of religion. Firas Nasr is a Middlebury alum, Class of 2015. Firas is an activist, an organizer, and the founder of WERK for Peace. WERK for Peace, and that’s W-E-R-K, uses public displays of exuberant dance to promote justice around a breadth of intersectional causes, women’s rights, environment justice, immigrant and refugee rights, to name a few. WERK for Peace protests have gained the attention of the Washington Post, BBC, CNN, Vice, BuzzFeed, Time, NPR, and more. Together, we spoke about why Firas is not trying to change everyone’s mind, the importance of creating space for anger and joy in activism, and the connection between being seen and sustainability.

Recording:                   We’re here to work to support the marginalized communities that have built the LGBTQ movement.

And we’re here to celebrate our bodies, our health, our love for one another, and our community because health matters for everyone.

LP:                               We are in a space where people’s perspectives on LGBTIQ-plus communities are changing. So you’re part of that tide of change. Have you ever had an experience where you’ve been able, through your activism, to change even one person’s mind?

FN:                               I grew up in an Arab household, and dance has always been a huge part of my childhood. I remember one of my mom’s best friends taught me how to dance, and we were belly dancing together. There’s a whole cultural aspect of why dance is so important to me. I think for many people, dance is such a huge part of their livelihoods and their cultures. And in that way, dance becomes a universal form of us being able to connect with one another through movement.

FN:                               Most definitely. And I come from a background of … I studied Reiki and I do energy healing. I meditate every day, and I love dance. And dance feels so freeing to me. It feels like such a mechanism for me to connect with my community. And when we also look back, we see that bars and clubs have been the spaces in which the queer community has felt most safe.

FN:                               I think my favorite protest was probably … I remember one moment we were actually leaving Mike Pence’s neighborhood. And a man came out with his two children to check out what was going on. And I just remember he put both of his fists in the air and yelled as loud as he could, “WERK for Peace.” And it was just the most beautiful experience for me to see a man and his children out celebrating with us.

LP:                               I want to read something that you were quoted as saying because I think it directly relates to what we were just talking about. You said, “I’m not a philosopher and I’m not a politician, but I’m an activist. But I do feel like on both ends, from the conservatives to the liberals, peaceful protest is not only powerful, but extremely necessary in a democratic process.” And there is that interesting interplay in that quote between listening and fighting to be heard and seen. And I’m wondering if you could talk a little bit about any experiences you’ve had where you yourself feel like you might be part of a system that you want to change.

FN:                               Yeah. So I think for me here, what comes to mind is my self-care practice, actually, because I think that as individuals in general, it’s very easy for us to become comfortable with what we know. And the reason why we’re comfortable with that, I think, is because—at least this is just my thought process—is that it feels safe and it feels secure. And as humans, we desire a sense of safety and security. So it’s totally valid that we want to feel comfortable. But I do think that through this comfort, we develop an immunity to change. And that immunity can be dangerous when we are working to support younger generations because it doesn’t give us the space to really question our own beliefs and our own positions in the world. And I think that is vital. It’s vital to overcome that immunity.

Erin Davis:                    Hi. This is Erin Davis, producer of the show. Midd Moment is produced by myself and Juliette Luini, Class of ‘18.5, with help from Chris Spencer. If you have a Midd Moment to share, a time when things came together in a particularly Middlebury way, share your memory on social media using #MiddMoment. Or record a voice memo and email it to us at middmoment@middlebury.edu. We’d love to include your Midd Moment in a future episode of the show. For more conversations like this, subscribe to Midd Moment on Apple Podcasts or wherever you get your podcasts. Thank you for listening.