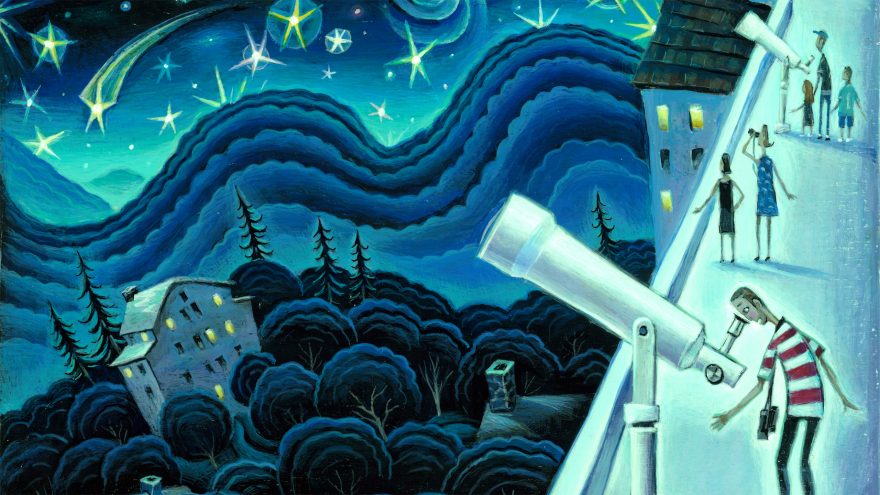 If you are intent on ascending by foot—instead of taking the elevator—from the lower level of Bicentennial Hall to the Mittelman Observatory situated on the building’s rooftop, you must be prepared to climb exactly 175 stair steps, a simple enough task, though for the acrophobic, once you reach the fourth story it’s probably best not to gaze over the railing looking down into the Great Hall.

A little before ten o’clock on the Friday evening of Reunion Weekend, I was around stair step 150 when a young boy scampered past me, much to the protestations of his father, who lagged a bit behind, a sleepy toddler held tight to his side. Soon, we all discovered that rushing to the darkened observatory was a futile exercise if, that is, we wanted immediate access to the gem of the facility: the 24-inch reflecting telescope housed in the dome.

A crush of middle-aged folk and their respective offspring filled the lobby of the observatory, with a long line—at least 50 deep—snaking up the extra flight of stairs to the domed space above. (Overheard at this moment: “What are we doing here? It’s bedtime! We might need to sleep on the moon.”)

I ventured outside onto a spacious rooftop deck where a few smaller telescopes had been set up. There were fewer people outside, though truth be told, I felt like we were keepers of a small secret: it was surely more pleasant out here, on this cool evening under a clear canvas of bright stars, than queued up in the stuffy, crowded dome. (Jonathan Kemp, the observatory’s telescope and scientific computing specialist, would argue that both were worthwhile experiences. That’s Jonathan and his dome habitat in our feature “Out of Office.”)

One of the rooftop telescopes was aimed due south, pointing above LaForce Hall; I peered into the eyepiece, and there, hundreds of millions of miles away, appeared Jupiter and four of its moons.

Behind me, a woman spoke to her friend: “Do you remember lying down outside Battell and looking at the stars? This is just like that.”