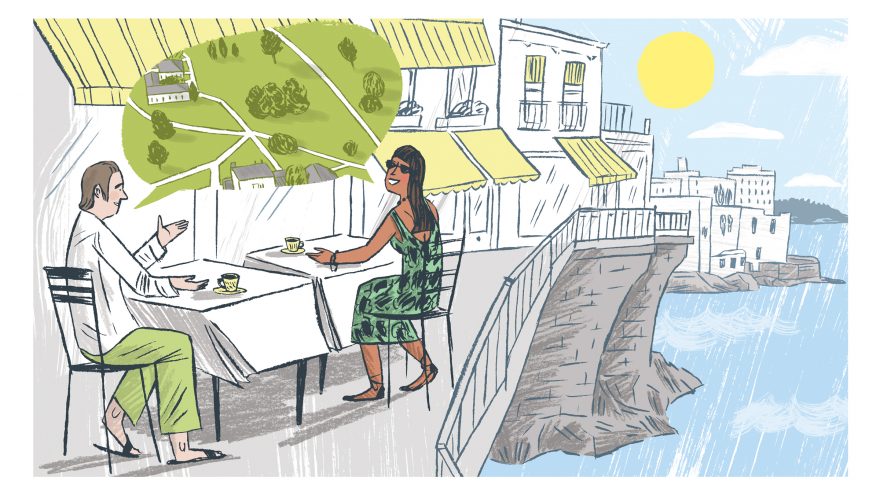 I never signed the pledge not to speak English, to search all summer for the right new word. Never left my English at home, for the sake of learning a language not my own. Or immersed myself in Immersion’s dormitory room. Although, it’s true, in my room. Although, it’s true, in my Middlebury undergraduate days, I sat in a Munroe Hall classroom, fulfilling my language requirement. Taking one course, Scientific German, with Herr Berndt. Sitting in my assigned seat, waiting my turn to translate one sentence from German into English. Learning how to purse my umlaut lips.

Until I traveled halfway across the world, where I couldn’t speak one of their singing, war-torn words. Where the echoes of arias and gunshots filled my ears. The rhythm of sounds, consonants stacked like stones, precious and grave. Occasional vowels and aging vineyards and tank-tracked bridges. In the Czech Republic, Poland, Hungary, Slovakia, Croatia, and Slovenia. And, too, in a winery on the lower slope of Sicily’s Mount Etna, overlooking the sea. Where the grapes hold the flavor of lava and bones.

I couldn’t speak a word. Had no pledge to sign. Nothing I couldn’t hear. Words to try to pronounce the world. As did the language students, my clients, on our Middlebury campus, with whom I worked, June to August, for almost 40 years. Languages floating, singing from Munroe Hall’s signed, pledged windows. Rising from the College futbol pitches. Slipping into our speaking, dining halls. Here and over there, filling my language-filled ears. Sounding bells of speaking memories. How language curled in my ears, the sea in a beach’s shells.

Perhaps English wasn’t the first sound I heard. Perhaps it was the shtetl Yiddish my immigrant grandparents taught my parents to speak. To keep secrets from my sister and me. To say things to each other, before we could know what they meant. For time’s sake now, I can still hear them say, “Geh schlafen,” a few minutes before it was time for us kinder to go to sleep.

Perhaps it was my first day in high school, in Brookline, a suburb of Boston. Where Miss O’Brien taught us to curl our tongues. To speak the impossible o. She wouldn’t let us forget it was she who wrote our text, who taught us our first lesson, for the life of me, I’ll never forget.

Or, perhaps, a few years later Herr Susskind, at my boarding school in New Hampton, New Hampshire (my gateway to Middlebury College), who taught me German is a song and nails in the throat. Who would have no way of knowing, years later, I would think of what he said. As I was walking under the restored, wrought-iron gate in Poland’s Auschwitz. Sun burning through the words “Arbeit macht frei.”

And tonight, thinking of the words the late Anthony Bourdain might have written: “I can hold a word in my mouth / to keep the world together.”

Words and phrases, memories I have had to raise—greetings and goodbyes—because of all the days of walking across our Language Schools’ sidewalks and paths. Remembering the courage and struggle our students displayed. Pledging, by the end of a summer, to say more than hello, to speak in new sentences. To write long letters, essays, and plays. To feel the pleasure of not having to think how to say, “What a pleasure it is to be here.” Not having given up. Not disappearing into English.

And, too, before I forget, one fall in Siracusa, Sicily, sitting outdoors in a market. Hearing the woman next to me, speaking English. So I could say hello. To which she responded, “Where are you from?” “Vermont,” I said. “Where in Vermont?”  “Middlebury.” To which she exclaimed, “That’s my college! I was a poli-sci major with Murray Dry. I’m a lawyer in Washington now.”

We two alums. Shooting the pronounceable breeze. In the early afternoon Italian sun.