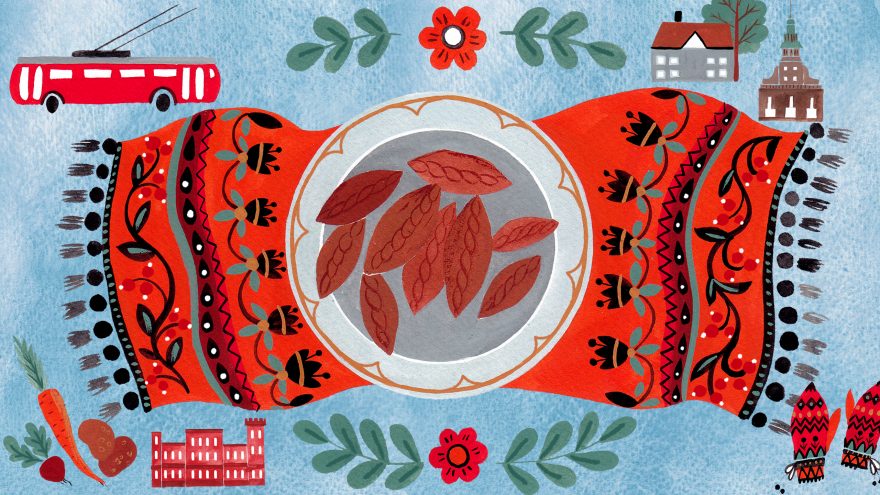 My grandma, Ligita—everybody called her Kiki—had a rug on her kitchen floor that was patterned with vegetables, carrots, and potatoes aligned symmetrically in a neat array. My sisters and I would play on the rug in her kitchen while she baked pīrāgi and sang us songs and told us to hate injustice but not people. She sometimes let us light the candles on her dining room table. Once she showed us how to needlepoint small ornaments for the Christmas tree.

When I inquired about her biography for a school project, she told me how she and her family fled from Latvia to Austria in 1944 when they heard the Russians were invading Rīga, how they begged for food, how she moved to Ohio with only a few dollars, and how 13 men proposed to her before she met my grandfather, an Estonian doctor who played the violin every day of his life.

Latvia has a tumultuous history. The USSR occupied the country from 1940 until 1991, with a brief occupation by the Nazis in the early 1940s. When Kiki left, the Soviet influence was just beginning. After the collapse of the USSR, Latvia was left with a population shaken by the repressive regime, yet eager to restore the language and traditions of their independent past.

The relics of this history are found in all corners of the country, something I discovered in 2016 when I was awarded a Fulbright and was sent to teach English in Madona, Cesvaine, and Lubāna, small towns located in the central uplands.

Hardly a week went by without mention of the “Soviet times,” and it seemed that the experience of the occupation has been burned into the collective memory of all who lived through it.

The culture of Latvia is characteristically reserved and untrusting, qualities attributed to the fear instilled in the population under the Soviet Union. Latvians take a long time to warm up to outsiders—small talk is hard to come by, even in the smallest of countryside towns—revealing a lack of trust that is understandable given the country’s history.

Yet Kiki never talked about the all-encompassing darkness of winter, or the palpable quiet on the streets, or that nobody seems to smile in public. She didn’t tell stories of alcoholism, or domestic abuse, or unemployment, as these issues are vestiges of the latter half of the 20th century, by which time she was settled into her new American life.

It is possible that her childhood was nearly magical, but it is also undeniable that her life was altered significantly because she was able to leave. I have always felt ties to my Latvian roots, yet I wonder now what grandchildren of today’s refugees will find if they return to their ancestral homelands in 70 years.

When I felt particularly sad and lonely during my time there, I thought about Kiki’s resilience. She worked as a night janitor to pay for medical school where she graduated as the only woman in her class. She learned fluent German and English, raised a loving family, and lived with incomparable compassion and grace. Even on cloudy days, Kiki’s memory brought me sun.