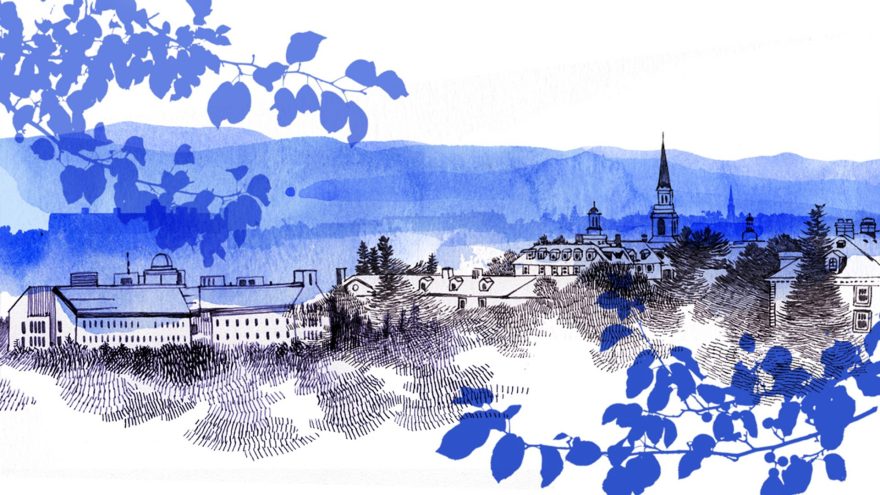 Greetings from a Middlebury November. With the twin holidays of Veterans Day and Thanksgiving, I think of November as a time of both reaching out to help others and gratitude for those who have helped us.

As I write this, I’m on my way to our Monterey campus, and I just received the most inspiring news—particularly relevant for those November themes. I’ve just learned the results of the ALL IN Campus Democracy Athletic Challenge—where NESCAC schools compete on voter participation, just as they would in an athletic contest. I’m thrilled to announce that Middlebury won in three major categories—receiving awards for the highest voter registration, highest voter turnout, and most improved voter turnout in the 2020 presidential election (compared to 2016’s election). While we are already recognized for our high rate of student voting, and as leaders in the NESCAC Votes coalition, even in this competition we substantially expanded our student voting rate—up 23.4 percent from the 2016 election, to 85.7 percent of eligible students voting.

By the time you read this, Middlebury will have been recognized as the winner of all three of the awards at a November 10 awards ceremony of the “All IN Campus Democracy Challenge’s NESCAC Votes Athletic Challenges.” The director of our Center for Community Engagement, Ashley Laux, says it plainly: “More than winning the awards, though, I am buoyed by Middlebury College students’ commitment to participating in our democracy through voting.”

Ashley’s news is wonderful for so many reasons. To meet this challenge, our students were engaged in a sustained effort to pay it forward. They partnered with the MiddVotes student organization leaders, with cultural organizations on campus, and with liaisons in Athletics who, Ashley tells us, worked with every single athletic team to register athletes and help them make plans to vote as part of our “Middlebury Does Democracy” challenge. And the students came from a variety of political persuasions.

These results were possible because of a shared commitment, not just to democracy but to an old-fashioned idea—that of service. As a noun, service means both “an act of helping or doing work for someone,” or “a system supplying a public need.” Both ideas have long been Middlebury traditions—whether that is international volunteer service, military service, or volunteer service at home. In the 21st century, we’re working on new definitions of service that indicate the power of helping or doing work with someone, not just for them. But this November, even as it is shaped by our contemporary needs, the strength of the classical idea of service is real.

In fact, I would go so far as to say Middlebury’s alumni body is wired for service. Throughout our two centuries, we’ve often called ourselves the college that educates “teachers and preachers.” That phrase was coined at another time in Middlebury’s history, and today’s diverse students may not necessarily identify with an exclusively Christian perspective. But their focus on giving back to others through education, nonprofit leadership, governmental service, and volunteer work remains paramount.

In today’s Middlebury, every year approximately 15 to 20 percent of the students in our graduating classes go on to serve in a social impact field, with national service organizations, social services, government (health and human services), education, advocacy, and the military. If we include health care, we can add another 5 to 7 percent. In other words, about a quarter of the members of our graduating class go on to work for others each year.

And even while they’re at Midd, more than 80 percent of our students volunteer in the community on their own time. Most recently, that work included creating mutual aid organizations and offering online tutoring for primary school students during the pandemic. In their response to pandemic surveys, Middlebury students rated taking care of others’ health above taking care of their own. There are a myriad of examples, and I wish I had the space to tell all the stories of our students’ work in the world.

Social impact is only one of a number of ways to think about Middlebury’s commitment to service—to helping others and making systems better. Middlebury’s history is also deeply impacted by military service. Middlebury students have served and sacrificed in the military—some giving their lives—throughout American history, through times of peace and times of war. Middlebury’s student population was heavily influenced by those choosing ROTC in the mid-20th century. Many alums were profoundly affected by their military service in Vietnam and Iraq. As my visits with them every June at Reunion time attest, Middlebury vets’ reflections on service are moving and powerful. And, since its beginning in the mid-20th century, the Middlebury Institute of International Studies at Monterey (MIIS) has hosted a large number of post- or mid-service veterans in every class.

And not all military service looks the same in Middlebury’s history: not only did he help lead Middlebury through the 1918 pandemic (something I can relate to!), but President John Martin Thomas made a request to the trustees to leave Middlebury for a time to serve as a chaplain during the First World War. And then there’s Emily Núñez Cavness ’12, CEO of Sword and Plough and a former U.S. Army captain, who continues the awesome project of giving back to her community by repurposing military-issue materials and making them into high-fashion wearable goods.

International service is yet another proud Middlebury tradition. Among colleges, our population of Peace Corps volunteers, both going to and returning from their service, has often been one of the highest in the nation. MIIS regularly welcomes back volunteers who, through the transformative nature of their experience, have decided to devote their careers to public service and study at MIIS. In fact, a professor at the Middlebury Institute of International Studies, the late Peter Grothe, actually created the name “Peace Corps.” And MIIS has its own fellowship program for Peace Corps volunteers, called the Paul D. Coverdell Program, founded by Beryl Levinger, herself a Peace Corps volunteer.

Through the efforts of a Peace Corps cohort of over 100 faculty, staff, and students on campus, you can watch online discussions of many of their volunteer experiences here.

Not everyone today is comfortable with the idea of service. Not everyone agrees with the idea of the Peace Corps. Or of the military. Or of Teach for America. Some argue that the term service is lopsided, and that service organizations small and large can easily turn into patronizing forms of volunteerism that only perpetuate the status quo of wealth inequity, racial tension, and climate damage, in the United States and globally. In some cases, that critique may be true. And in those cases, we can and should change those systems and create more equitable systems of help and care, systems of mutual benefit where human dignity is enhanced in both directions. That work of improvement is in itself a form of service. That’s the idea, for example, behind “tandem language learning” in Monterey. In this tandem learning program, instructors in a morning session teach English to Spanish-speaking citizens in Salinas. They then switch roles and themselves learn Spanish from those same students, who become their teachers in the afternoon. Service can be mutual, and we should make our service opportunities work to create that mutual benefit wherever we can.

Indeed, many argue today that wide-scale service opportunities are the way out of our nation’s polarization. Wherever you land in the debate about a mandatory national civil service, everyone agrees that working on a team on behalf of others has powerful bonding effects. Social science backs this up, from high school and college onward. We need those effects today—not only in higher education but in the halls of our nation’s Capitol, in the town hall meetings of our rural communities, on municipal boards, and in corporate governance.

So even with our long-held Middlebury traditions of service, and our wonderful “Middlebury Does Democracy” victories of the past week, we could do even more. We could create even more reflection opportunities about international and national service in our alumni bodies. We’re working to get to 100 percent volunteer activity for our undergraduates. We’re working to connect more Midd Vets in Vermont to our vets in California. And so much more.  We’re excited to continue these projects.

I’ll leave you with one final thought: the old-fashioned idea of service, updated to the 21st century, can speak across the generations. My guess is that an alum from the Class of 1950 would be proud of our MiddVotes student organization leaders from the Class of 2025, regardless of political or religious persuasion or socioeconomic status. And those 2025 volunteers, typically eager to learn from others’ examples, would in turn be curious about our older alums’ experience of service and society in the mid-20th century. That’s mutual pride across deeply different cultures. That’s the way we build a better Middlebury.