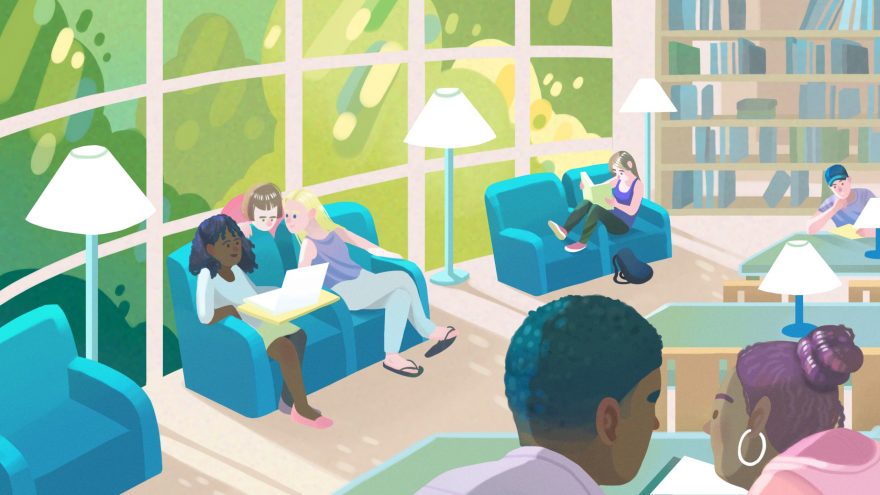 It was mid-morning on a Sunday, just four days after the start of classes at Middlebury, and the Davis Family Library was more populated than I had expected.

It was unseasonably warm—the mercury would creep into the upper 80s later that afternoon—and I was in search of a cool, quiet spot where I could sit in a comfortable chair for a few hours and, without distraction, focus on some work with looming (or missed!) deadlines. (For the record: wandering the stacks of periodicals on the lower level is not a distraction, but rather a digressive opportunity to further fuel the creative process.)

I found my chair on the upper level, but my attention was almost immediately drawn elsewhere. I didn’t think the library would be empty at this time, but I was intrigued by the number of students who were pecking away at laptops, painting printouts with highlighters, and speaking in semi-hushed tones while checking out a display near the circulation desk that featured the College’s literary journal, the New England Review.

I know: college students in the library on a Sunday is not a revelation. But on a day that felt like summer, at a time in the semester (and hour) that would seem to warrant greater sparsity, I was struck by the moment. As I wandered around hearing snippets of conversation and observing what folks were reading (Premodern Japan, On Liberty), a clearer picture emerged. It was not one of stressed-out students or people fulfilling an obligatory function, but rather a natural course of events, one in kind with the jam-packed activities fair on the lawn next to McCullough two days prior and the loud cheering sections at soccer and field hockey games on a sun-drenched Saturday afternoon.

On campus, the year had begun anew. For some, it was the beginning of the collegiate experience; for others, a return—and a welcomed one, from my observations.
Eventually, I made my way back to my chair and settled in. Stories demanded attention. Deadlines whispered (or shouted!) their urgent warnings. A natural course of events.