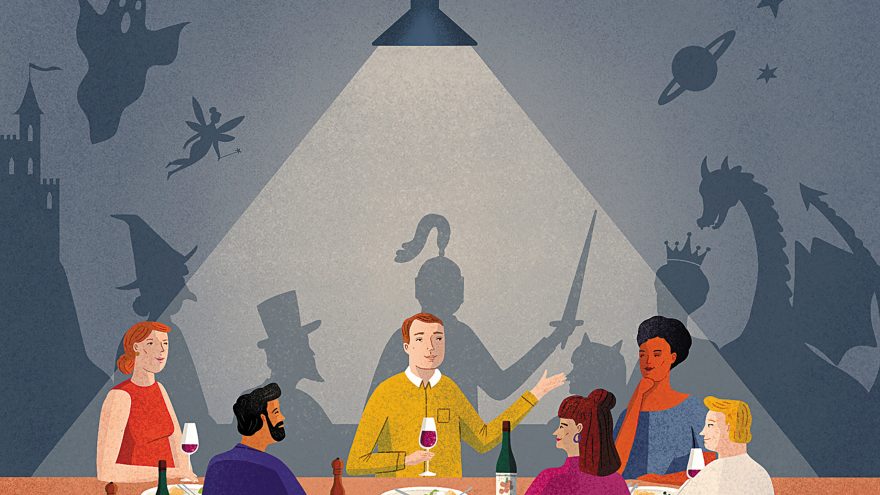 I was at a dinner party one evening not that long ago when the table discussion turned to the subject of the zombie apocalypse. (What? You don’t converse about such things at your social gatherings?) When such talk occurs, it’s not long before people focus on the essentials, such as, you know, survival. Where will we go? Karen and Jud’s. Done. Who do we need to maintain a civilization? Now, this is code for Who is dispensable? Among us were builders and hunters and healers; most everyone was mechanically skilled, if not by trade then by hobby.

And then there was me.

“Matt, you’re probably out of luck.”

I can’t exactly recall who said this (though I suspect it was my wife), but I was anticipating this moment and had a retort: “Every civilization needs a storyteller.” There was humor, if not self-preservation, behind this remark.

Dispensing with the zombie talk—though that was an entertaining anecdote, don’t you think?—I’d like to tell you why stories are so important. Or, rather, I’d like to quote Jonathan Gottschall, the author of The Storytelling Animal: How Stories Make Us Human, on the matter: “Story—sacred and profane—is perhaps the main cohering force in human life. A society is composed of fractious people with different personalities, goals and agendas. What connects us beyond our kinship ties? Story . . . Story is the counterforce to social disorder, the tendency of things to fall apart. Story is the center without which the rest cannot hold.”

We discover this at an early age. Bedtime rituals don’t begin with a child turning her imploring eyes toward a parent and then asking about the news of the day, after all. We humans crave stories, and sometimes those stories have an outsized impact on us.

A few months ago, I asked some folks in the Middlebury community if they could identify a story that changed their lives; their answers didn’t disappoint. And it’s now my hope that you might be willing to share the stories that remain lodged in your consciousness, tales that have caused you to weep, laugh, gasp. Shoot me an email at middmag@middlebury.edu. And if you can tell those stories well, there might be a place for you in our hideaway when the zombies arrive.