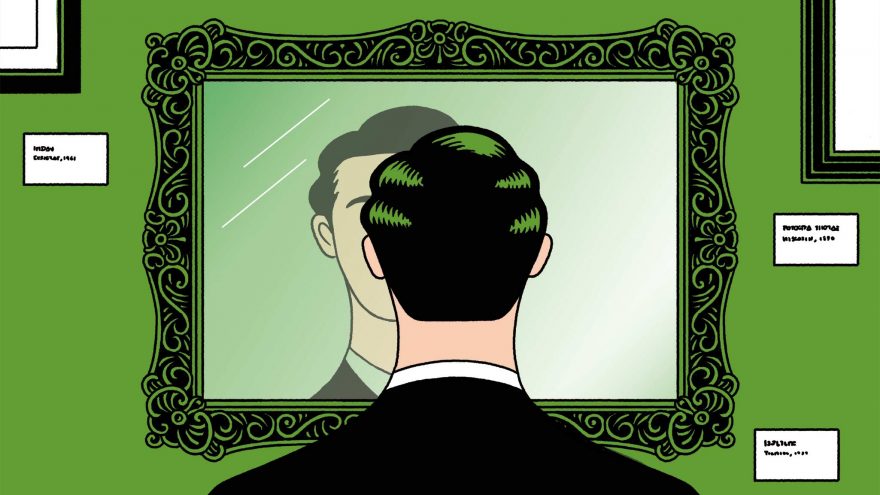 On a damp, overcast March morning, I went in search of the American face.

My quest took me to Middlebury’s Museum of Art, where Richard Saunders, the museum’s director, has curated a brilliant exhibit of portraits—nearly 100 in total drawn from more than 20 collections—that, taken together, reveal a fascinating portrait all its own: this country’s cultural obsession with self.

The exhibit, American Faces: A Cultural History of Portraiture and Identity, is staged in seven sections that essentially serve as chapters of a story (it was preceded by Saunders’s most recent book bearing the same title). The self-guided tour of American identity encompasses such themes as “The Rich,” “Portraits for Everyone,” and “Fame.” The chronology of the work traces the interests and media of the age—exquisite 18th-century oil paintings (only the wealthy could afford such portraits), a daguerreotype and hollow-cut silhouettes from the 19th century, a mammoth Chuck Close self-portrait from our last century—affording the visitor an acute sense of how we have seen ourselves and how we have expressed these visions during the past three centuries.

But perhaps the most interesting aspect of Saunders’s work is his expanded definition of the portrait itself. “One goal of mine,” Saunders says, “has been to broaden the definition of portraiture to include many images, such as snapshots, which are often ignored by scholars primarily because they are by anonymous amateurs. In so doing, I hope to enable viewers to make better sense of the more common types of portraits that routinely pass before our eyes—in the media, in public places, and in the home.”

So sharing space with the masterful works by Warhol and Close and the painter Charles
Wilson Peale are items such as a giant LeBron James wall decal (the likes of which would be perfectly at home in my son’s bedroom), a looped video of the first televised presidential debate, Shepard Fairey’s Obama Hope poster, and the visage of Osama bin Laden as presented on the FBI’s Most Wanted poster.

I would love to see this exhibit again in 20 years. What new ways will we have discovered to express our collective identity? And how will we see ourselves?