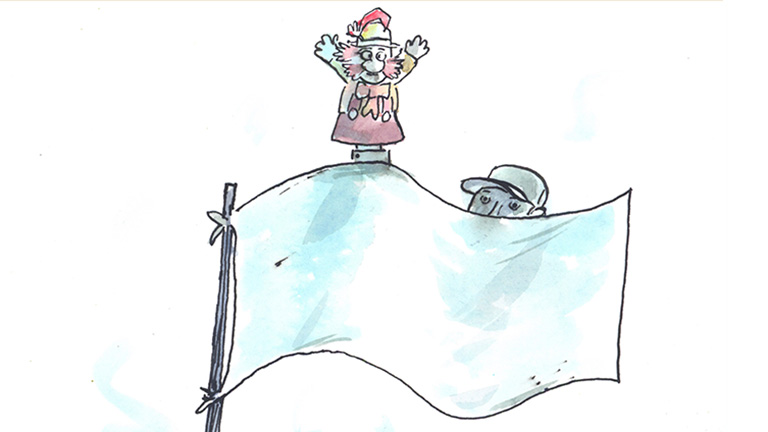 As many Long Trail hikers know, Vermont has its own presidential range. It’s less lofty than the famous one over in New Hampshire, but four peaks between Bread Loaf Mountain and Lincoln Gap—partially visible from the Middlebury campus—bear the names Mount Wilson, Mount Roosevelt, Mount Cleveland, and Mount Grant.

And right in the middle, between Roosevelt and Cleveland, is a lesser summit called Little Hans Peak. Little Hans? What was he president of? Where did that name come from?

Well, I’ll tell you. I know. I was there. In the summer of 1970, just before my senior year, I got a job as one of four members of a Green Mountain National Forest trail crew. Three of us were college students, and our leader was Ray Secor, a Navy veteran and seasoned hiker who already had his Long Trail end-to-end patch.

We went out on Monday mornings and returned late Friday, camping out during the week along the trail. One week as we worked north of Bread Loaf, we carried a bag of some food product—I forget what, but it might have been chocolate bars—that included a hand puppet, presumably for the entertainment of children like us.

The puppet—basically a small plastic bag printed with a face and hands sticking out—was named Little Hans. It said so on the package. We waved Little Hans around from time to time and made dumb jokes. And as we trekked between our campsite and the spots where we worked on the trail, we repeatedly crossed an unnamed summit.

As the week progressed, a consensus emerged that this hump between Presidents Cleveland and Roosevelt was worthy of a name. At camp one evening, Ray carved a small sign. The next day, we attached the sign to a tree on the summit. It read “Little Hans Peak.”

I’m a lifelong hiker, though I rarely get back to Vermont and haven’t revisited that section of the trail since that week 46 years ago. So you can imagine my surprise as I leafed through the September 2016 issue of Backpacker magazine and encountered a short article recommending a peak-bagging walk in the Green Mountains: from Cooley Glen Shelter to Mount Wilson and back, crossing the summits of Cleveland and Roosevelt and, in between, Little Hans Peak.

I gawked in disbelief.

To confirm what I was seeing, I ran and grabbed my copy of the Long Trail Guide, 2011 edition. And there it was—in boldface, on Page 136—Little Hans Peak.

During the past half century, I’ve lost touch with my trail crew colleagues. But Ray Secor, John Anlian, and Bob Llewellyn, wherever you may be, please take a bow.

Rob Waters spent nearly 40 years as a newspaper reporter and editor at dailies around the country, including the Philadelphia Inquirer, the Los Angeles Times, and the Raleigh News & Observer.