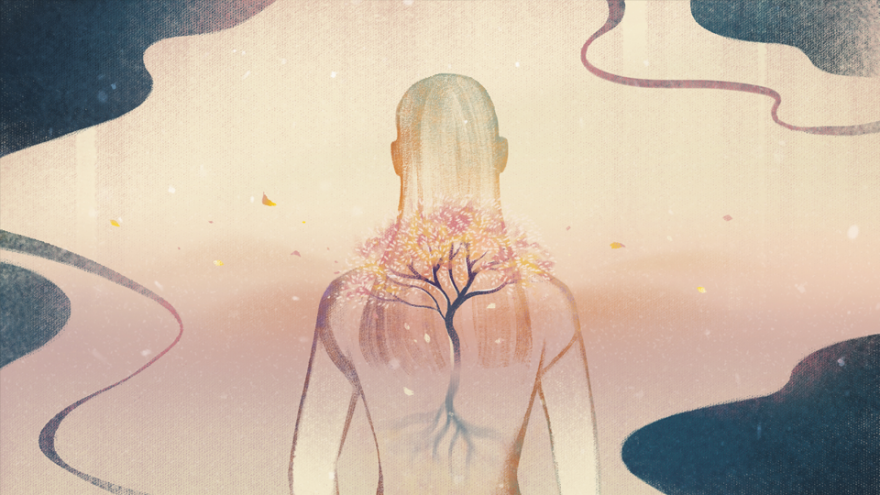 I didn’t expect to tumble into adulthood in such an undignified way.

My chest hit the tree with a heavy thud. I gulped for air but got none. I scrambled to my feet and staggered, snowshoes clanking on the icy trail, to where my friends waited. “I hit a tree,” I squeaked, trying to feign nonchalance as stars exploded in my eyes  .

My right side was tender from the impact, but there was no way to know whether I had broken any ribs—or worse, punctured any organs—without going to the hospital. An Adirondack backcountry ranger brought me, first on foot and then by snowmobile, to the nearest outpost. The snowmobile felt like a wild horse under me as every bump blasted my aching body.

At the outpost, a helicopter descended out of the opaque sky, kicking up a blizzard when it landed on the frozen lake. Following the ranger, I hobbled toward the helicopter as quickly as I could. When I reached the open door, he grabbed my right arm, which was connected to the side of my body that was likely mangled in some form, and yanked me in. I screamed, but he didn’t hear over the roar of the blades. We lifted off. The mountains were such a dark green that they appeared almost black.

I lay there for hours, the staff seemingly indifferent to my presence. After an MRI, which showed a broken rib, maybe two, and some blood in my lungs but nothing serious, they shoved me some Tylenol and told me to wait for my friends to pick me up. I was ashamed at having caused such a circus.

Alone, with nothing in hand except a pair of crummy down booties and a dead cellphone, I felt the familiar tug that had accompanied every negative life event until this point: wanting my mom. But she wasn’t coming to get me. I was a sophomore at Middlebury, and this was the first time I had ever had to completely rely on myself—not just the “go away to college” kind of self-reliance, but the “bad things are going to happen and you’re going to have to figure it out by yourself” kind. I signed the hospital papers, took guesses at which tests and scans to receive, and would eventually be held accountable for the classes I missed.

I think everyone reaches a point like this, when they become the sole proprietor of their own life. Some people start young, having to fend for themselves in difficult family situations; some, like me, remain innocent just long enough that the eventual shift is somehow surprising.

After the accident, I lost confidence in the backcountry, convinced that I was reckless and incompetent. Then I became overly careful, questioning the mildly risky adventures that my friends and boyfriend undertook. I was the parental figure, coercing others into packing a first-aid kit for even the smallest jaunts and tut-tutting if they hadn’t saved emergency contacts in their phones.

Now, five years later, I’ve reached a sort of equanimity: a blend of confidence and carefulness that nods to both the inherent dangers and the incredible thrills of life outdoors. I’ve become more accustomed to trusting myself to make big decisions, in the backcountry and in life.

Last spring, at the top of a 1,000-foot rock climb, my partner was waiting with a ring.