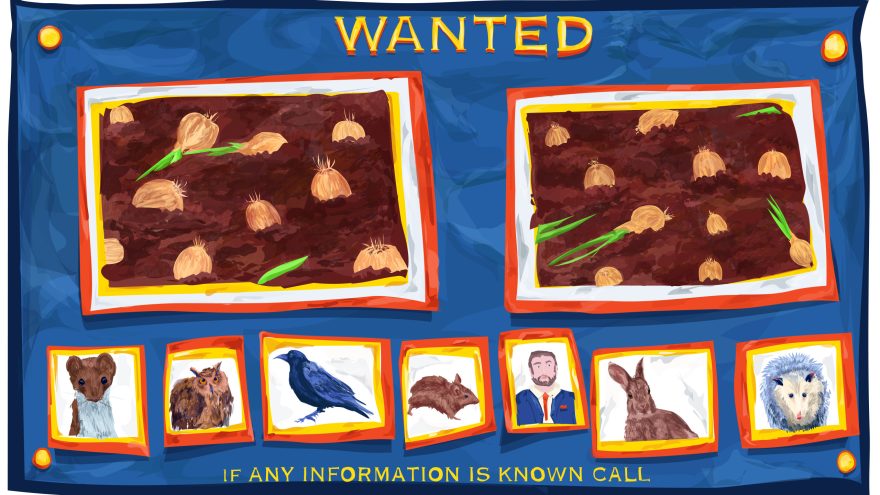 They always come at night.

In a matter of minutes, some … thing comes and undoes hours of work. Not out of malice, but with the cold calculation of an animal mind.

There’s a thief that prowls the garden of the Knoll. And it comes for the onions.

She first noticed it about a year ago. Rows of newly planted onions pulled out of the ground and haphazardly discarded. One time, the onions were pulled up and then replanted upside down. Stranger Things, indeed, she thought. And dug in to repair the rows that had been destroyed.

Megan Brakeley ’06 is in charge of this garden, of the whole area of the Knoll. An organic garden/gathering place/convergence dreamed up and brought to life by the power of young minds. Food produced at the Knoll feeds hundreds of hungry students and provides enough produce to share with the community.

But the onion thief makes that job more difficult. “I guess we’re replanting onions today,” Megan muses as she goes to redo the work staff and volunteers had completed just a day before. Enough is enough, Megan thinks. It’s time to call in someone who can help identify the creature that’s causing such wanton destruction in the onion beds.

She needs a detective, she decides. And she knows just the team of sleuths for the job.

Biology student and former Knoll intern Jack Cornish ’22 is brought onto the case. He and his Hedge Lab team know a thing or two about animal behavior. They begin to identify possible suspects.

Traps are set up. Camera traps. Using cinder blocks and string, the investigator cobbles together a makeshift tree to support recording technology usually deployed to keep an eye on forest paths and clearings.

With the camera affixed to the faux tree, the lens is angled down at the scene of the crime. There’s no police tape surrounding the scene, there are no silhouettes drawn with chalk where a body once lay, there are just rows of fecund soil with oh-so-tempting sprouts. The team waits, safe in their lab complete with hedgehog mascot, collecting evidence.

Knoll cameras document several animals that may have an interest in the onions. A weasel, scouting out the area before slinking away to its lair. A mouse, hopping and scurrying on its merry, mousy way. A possum rooting around in the compost. Perhaps it wants to move to the other end of the supply chain and get a snack from the source. Rabbits and their sharp teeth are, without a doubt, in the area.

But the onions aren’t being eaten, the detective reports back to Megan, confirming her own investigation. So it’s back to the drawing board.

An owl is caught in the camera trap one night. Its image is delivered to Megan as if the researcher were sliding a folder across a desk in a dimly lit office, watching for a reaction from the client as they open the file and hope to see photographs of the offender in flagrante delicto.

Instead, it’s another suspect crossed off the list. It’s not an owl, they agree. Pulling up and replanting, or casting aside an onion shoot, isn’t an owl’s M.O.

The mystery deepens as the behavior continues. Camera trap recordings have offered little more than lists of rodents and their predators as suspects who are quickly dismissed. Strings of investigation drawn between possible culprits and evidence provide no clarity.

Meanwhile, depredation still awaits Megan’s arrival at her farm’s vegetable beds some mornings. The bodies of murdered shoots abandoned and forgotten by a hunter.

And there’s still that baffling time that the onions were replanted. Upside. Down.

One type of mammal was strongly considered at the first discovery of the onion thief. A human.

The Knoll is close to a population of humans who are known to enjoy a prank or two. In fact, this group of humans even has a subgroup called the Pranksters. But humans were quickly ruled out as the perpetrators. The remains of the onion beds don’t look like a person either pulled up the onions or tried to replant them. It’s chaos and disruption. A clash between agriculture and the unidentified instinct of a clever mind.

Megan’s seen hawks scouting out the Knoll in their wide, watchful circles. Kestrels, ospreys, all of these have been seen by the garden’s guardian. More additions to the list of suspects that can be scratched off.

Finally, one night, the biology student heading the investigation gets a lead and texts new evidence to Megan. The camera trap has identified an animal of interest in the case. And it’s one of mankind’s oldest avian friends.

Trickster, prophet, and one always ready to take advantage of an opportunity others miss.

Their new evidence, a moment captured by the camera, reveals a crow with a long, tubish thing in its beak, standing on the bed in the dark of the night. “An onion?” the biologist asks Megan.

But still, it’s the best lead they have. And at last, a suspect stays on the list.

Crows, rooting in the bed for juicy worms. The onions get tossed aside in a primal frenzy to feed. Biologist and farmer agree this is the likeliest scenario.

If friend Crow is the one stopping by the Knoll for a midnight snack, sometimes being overly clever and putting the worm-covering onion shoots back into the ground after yanking them out, the knowledge really brings no solution to the problem of having a small staff work twice on the same project.

Neither Megan nor the team of biologists are out to punish the creature who’s only doing what we all do: surviving at any cost. They just want to know, so they can welcome the “thief” as a member of the natural community and take that into account as they put more onions in the ground.

As the Abenaki teach, Megan thinks under her wide-brimmed hat, spring sun pouring down around her, hands working in the bed, “you always plant extra.”